Shelter Cove is a census-designated place in Humboldt County, California. It lies at an elevation of 138 feet (42 m). Shelter Cove is on California's Lost Coast where the King Range meets the Pacific Ocean. A 9-hole golf course surrounds the one-runway Shelter Cove Airport at the center of Shelter Cove's commercial district. Utilities are provided by the Humboldt County Resort Improvement District #1 and boating access to the sea is managed by the Humboldt Bay Harbor Recreation & Conservation District. The population was 693 at the 2010 census.

Shelter Cove shares a ZIP code (95589) with the hamlet of Whitethorn, California, located to the southeast. The community is inside area code 707. Sinkyone Wilderness State Park is about 6 miles (9.7 km) south of Shelter Cove on the coast. There are also state parks such as Black Sands Beach, Mal Coombs Park, Seal Rock Picnic Area and Abalone Point. Much of the land around Shelter Cove belongs to the Kings Range National Conservation Area, managed by the Bureau of Land Management. Cove amenities include hiking trails, a community center, deli, coffee shop, restaurants, multiple inns, a general store and several gift shops. Other amenities in Shelter Cove: a small aircraft airstrip, a boat launch, and RV parking. What's not available in Shelter Cove are in the towns of Redway and Garberville in the U.S. 101 corridor, about 20 miles (32 km) of winding county roads to the east.

The area around Shelter Cove was originally home to Native Americans known as the Sinkyone people. 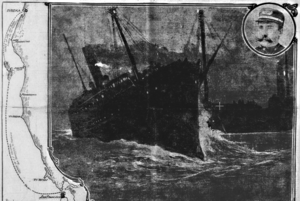 An illustration of the collision between the Columbia and San Pedro near Shelter Cove on July 21, 1907.

Because of the very steep terrain on the coastal areas surrounding Shelter Cove, the highway builders constructing State Route 1 (the "Shoreline Highway") decided it was too difficult to build the coastal highway along a long stretch of what is now the Lost Coast. As a result, the small fishing village of Shelter Cove remained very secluded from the rest of the populous state, despite being only 230 miles (370 km) north of San Francisco, and is accessible by boat, via small mountain road, or by the small Shelter Cove Airport.

As a result of its seclusion, the Shelter Cove area has become a popular spot for those seeking quiet vacation respite or retirement area. Popular activities in the area include fishing, whale watching, hiking, diving for abalone, and other outdoor activities. 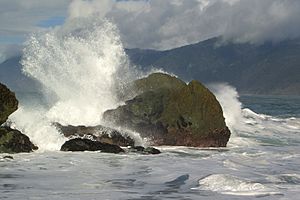 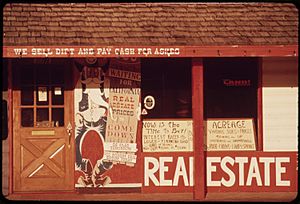 Shelter Cove has a warm-summer Mediterranean climate (Köppen Csb) typical of the North Coast, that is characterized by warm (but not hot) dry summers, and mild to chilly rainy and/or snowy winters. In Shelter Cove's case the climate is moderated by the proximity to the Pacific Ocean with small temperature variations on average throughout the year, which results in mild year-round temperatures, although some winter months can get quite cool at times. Average high temperatures range from 57 °F (14 °C) in January to 69 °F (21 °C) in September. Shelter Cove on average has very wet winters and dry summers, also representative for the region. Temperatures of above 32 °C (90 °F) are very rare, happening on average 1-2 times per season, but temperatures approaching 34 °C (93 °F) or above have still been measured over such a wide time period as from April to October. For being a coastal community north of the Bay Area, Shelter Cove has quite mild temperatures.

All content from Kiddle encyclopedia articles (including the article images and facts) can be freely used under Attribution-ShareAlike license, unless stated otherwise. Cite this article:
Shelter Cove, California Facts for Kids. Kiddle Encyclopedia.