Shepman Run (also known as Shepmans Run) is a tributary of Little Muncy Creek in Lycoming County, Pennsylvania, in the United States. It is approximately 2.6 miles (4.2 km) long and flows through Moreland Township. The watershed of the stream has an area of 1.59 square miles (4.1 km2). A covered bridge crosses the stream. Shepman Run is classified as a Coldwater Fishery and a Migratory Fishery. 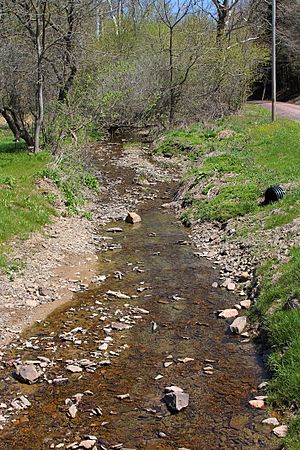 Shepman Run has no named tributaries. However, it does have one unnamed tributary, which is 0.5 miles (0.80 km) long. 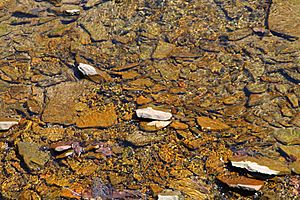 A bridge known as the Eichenlaub bridge crosses Shepman Run in Moreland Township, off Tom Hill Hollow Road (on the road's west side). The bridge has a length of 16 feet (4.9 m).

The watershed of Shepman Run has an area of 1.59 square miles (4.1 km2). The stream is entirely within the United States Geological Survey quadrangle of Hughesville. Its mouth is located near Clarketown.

Shepman Run is in the Lower West Branch Susquehanna sub-basin.

Shepman Run is classified as a Coldwater Fishery and a Migratory Fishery, as are all of the other tributaries of Little Muncy Creek.

All content from Kiddle encyclopedia articles (including the article images and facts) can be freely used under Attribution-ShareAlike license, unless stated otherwise. Cite this article:
Shepman Run Facts for Kids. Kiddle Encyclopedia.