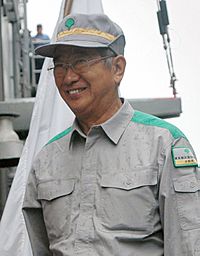 Shintaro Ishihara (石原 慎太郎code: ja is deprecated , Ishihara Shintarō, born 30 September 1932) is a Japanese politician and author. He was Governor of Tokyo from 1999 to 2012. He was the leader of right-leaning Japan Restoration Party. Ishihara is one of the most known conservative right-wing politicians in modern Japanese politics.

He unsuccessfully sought re-election in the general election of November 2014, and officially left politics the following month.

All content from Kiddle encyclopedia articles (including the article images and facts) can be freely used under Attribution-ShareAlike license, unless stated otherwise. Cite this article:
Shintaro Ishihara Facts for Kids. Kiddle Encyclopedia.