The cathedral is particularly notable as being the only cathedral in the county. Unlike most other English counties and county towns, neither Shropshire nor Shrewsbury have a Church of England cathedral. 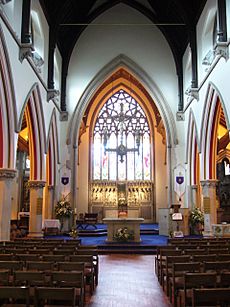 The interior of Shrewsbury Cathedral.

On 30 October 1956, a Mass was said in the cathedral to commemorate its centenary. The Mass was celebrated by Archbishop Francis Grimshaw of Birmingham, Bishop John Murphy of Shrewsbury, Bishop Cyril Restieaux of Plymouth, Bishop Edward Ellis of Nottingham, Bishop John Rudderham of Clifton and Bishop John Petit of Menevia.

In 1984, the cathedral was re-ordered, bringing it in line with the revised liturgy of the Second Vatican Council. Local Grinshill stone was used for the new altar, which was consecrated in 1985 by Bishop Joseph Gray.

In 2019, it was decided by Bishop Mark Davies that the cathedral's interior would be restored to its original state. The resulting programme of conservation work in the cathedral found a series of 19th century wall paintings by Joseph Aloysius Pippet. The paintings had been hidden under two layers of paint from previous refurbishments in the 1970s and 1980s, described by Sophie Andreae, of the Catholic Bishops' Conference of England and Wales, as "unsympathetic". It is hoped that the paintings can be restored to their former glory.

The cathedral has a seating capacity of 300.

The cathedral has several stained glass windows. The older set of windows are mostly from the stained glass company Hardman & Co. from Birmingham. The cathedral also has seven windows made during the second and third decades of the 20th century by an artist inspired by the Arts and Crafts movement, Margaret Agnes Rope, the daughter of a local doctor; Rope had a studio in the Glass House in Fulham. Later, Rope became a Carmelite nun, following training in Dublin. Her cousin M. E. Aldrich Rope designed windows for St Peter and St Paul Church in Bromley, among many other churches.

Rope also designed the cathedral's war memorial, in the west porch, dedicated to the 63 men of its congregation who died serving in World War I. It consists of a pieta, with a wooden plaque below displaying the regimental badge of the King's Shropshire Light Infantry (the main county regiment), and the arms of Shropshire and Shrewsbury. The list of names is inscribed below the plaque, and at its foot is inscribed the opening line in Latin of the Requiem Mass. Nearby was placed a plaque to mark the 50th anniversary of the end of World War II in 1995.

The cathedral is on a street called Town Walls, adjacent to the historic town wall, within the main meander of the River Severn in the centre of Shrewsbury. It is surrounded by a mainly residential neighbourhood.

All content from Kiddle encyclopedia articles (including the article images and facts) can be freely used under Attribution-ShareAlike license, unless stated otherwise. Cite this article:
Shrewsbury Cathedral Facts for Kids. Kiddle Encyclopedia.