Sidney is a city in and the county seat of Cheyenne County, Nebraska, United States. This city is nine miles north from the Colorado state line. The population was 6,757 at the 2010 census.

The city was named for Sidney Dillon, president of the Union Pacific Railroad. It was founded in 1867 by the Union Pacific and grew up around the military base of Fort Sidney (also known as Sidney Barracks), where soldiers were stationed to guard the transcontinental railroad from potential Indian attacks.

Sidney is home to one of the Old West's Boot Hill cemeteries; many of those interred there were soldiers from the fort.

Sidney is toward the western edge of the midwestern wheat-growing region. West of the city, the land is increasingly used for cattle ranching. Sidney is located along Lodgepole Creek, which is along present-day Interstate 80.

The city is presently located at the junction of US 385 with I-80, and its location approximately halfway between Cheyenne, Wyoming and North Platte, Nebraska has encouraged the growth of the city as a major transportation service area on the Interstate Highway. Because the I-80/US 385 interchange is located several miles southeast of the town center, a new commercial area has developed, including truck stops, convenience stores, the Cabela's world headquarters, shopping centers, motels, restaurants, and other commercial enterprises. In recent years, the city has seen further growth with the construction of wind farms in this portion of the Nebraska Panhandle and adjacent areas of Colorado, including Peetz, Colorado.

There were 2,893 households, of which 30.9% had children under the age of 18 living with them, 47.3% were married couples living together, 9.7% had a female householder with no husband present, 3.9% had a male householder with no wife present, and 39.0% were non-families. 33.4% of all households were made up of individuals, and 12.3% had someone living alone who was 65 years of age or older. The average household size was 2.30 and the average family size was 2.95. 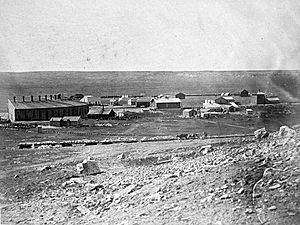 The Sidney Stage Line operates Monday-Saturday, with 12 stops on a deviated-fixed route throughout the city.

All content from Kiddle encyclopedia articles (including the article images and facts) can be freely used under Attribution-ShareAlike license, unless stated otherwise. Cite this article:
Sidney, Nebraska Facts for Kids. Kiddle Encyclopedia.