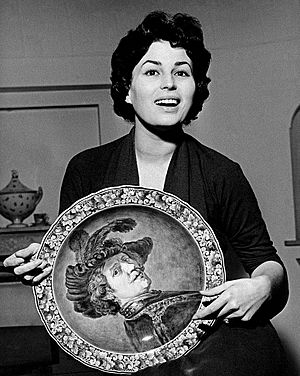 Silvana Mangano (21 April 1930 – 16 December 1989) was an Italian actress. She was born in Rome to an English mother and an Italian father. She played Silvana in Bitter Rice. She also played the title character in Anna (1951).

Mangano was born in Rome. She was married to Dino De Laurentiis from 1949 until they divorced in 1988. She died from lung cancer in Madrid, age fifty-nine.

All content from Kiddle encyclopedia articles (including the article images and facts) can be freely used under Attribution-ShareAlike license, unless stated otherwise. Cite this article:
Silvana Mangano Facts for Kids. Kiddle Encyclopedia.