The Arkansas–Little Rock Trojans, now known for sports purposes as the Little Rock Trojans and representing the University of Arkansas at Little Rock in NCAA Division I sports, played home basketball games at the arena from the time when the arena opened until the team moved in 2005 to a new arena, the Jack Stephens Center, on the school's campus in Little Rock. The Arkansas RiverBlades, a defunct ice hockey team of the ECHL, the Arkansas RimRockers, a defunct minor league basketball team of the NBA Development League, and the Arkansas Twisters, a defunct af2 team, also played at the arena. The arena is also used for other events, including concerts, rodeos, auto racing, professional wrestling, and trade shows and conventions.

On August 1, 1995, Pulaski County, Arkansas, voters approved a one-year, one-cent sales tax for the purpose of building a multi-purpose arena, expanding the Statehouse Convention Center in Little Rock, and making renovations to the Main Street bridge between Little Rock and North Little Rock. $20 million of the sales tax proceeds went toward the Convention Center expansion, with the remainder used to build the arena.

That money, combined with a $20 million contribution from the State of Arkansas, $17 million from private sources and $7 million from Little Rock-based Alltel Corporation paid for the construction of a 377,000-square-foot (35,000 m2) arena, which cost nearly $80 million to build. When the doors opened in 1999, the facility was paid for and there was no public indebtedness.

Two sites in North Little Rock drew interest from county officials for the proposed arena. The first was a 19.5-acre (79,000 m2) commercial site west of Interstate 30, which contained a strip mall, a Kroger and an abandoned Kmart storefront. The second site was an 11.6-acre (47,000 m2) plot at the foot of the Broadway Bridge.

The Pulaski County Multipurpose Civic Center Facilities Board selected the larger site for the arena in 1996 and paid $3.7 million for the land, some of which was acquired through eminent domain, a move protested in court by several landowners. 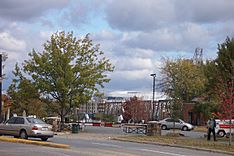 Although located in North Little Rock, Simmons Bank Arena can be seen across the Arkansas River from a number of locations in Little Rock.

The second site later would be chosen for the new baseball stadium, Dickey-Stephens Park, constructed for the Arkansas Travelers. The Class AA minor-league baseball team moved from the then 73-year-old Ray Winder Field in Little Rock to a new $28 million home in North Little Rock at the start of the 2007 season.

The arena hosted portions of the first and second rounds of the NCAA Men's Division I Basketball Tournament in March 2008 and the SEC Gymnastics Championships in 2007.

The arena is owned by the Multi-Purpose Civic Center Facilities Board for Pulaski County. The arena was designed by the Civic Center Design Team (CCDT), Burt Taggart & Associates, Architects/Engineers, The Wilcox Group, Garver & Garver Engineering and Rosser International of Atlanta.

The arena's 20-year naming rights were part of a $28.1 billion sale of Alltel to Verizon Wireless, effective on June 30, 2009, with Alltel Arena renamed as Verizon Arena.

Fleetwood Mac performed at Verizon Arena May 4, 2013 with surprise guests former President Bill Clinton and First Lady Hillary Clinton attending the show. Fleetwood Mac drummer Mick Fleetwood introduced the couple, who were seated in an arena suite, to the sold-out audience and dedicated the song "Don't Stop" to them, which was appropriately Bill Clinton's 1992 presidential election campaign song.

On October 5, 2016, the arena hosted the Kellogg's Tour of Gymnastics Champions.

With expiration of initial naming rights due in 2019, new naming rights for the arena were purchased by Arkansas-based Simmons Bank in a deal announced in November 9, 2018. The name change became official on October 3, 2019.

All content from Kiddle encyclopedia articles (including the article images and facts) can be freely used under Attribution-ShareAlike license, unless stated otherwise. Cite this article:
Simmons Bank Arena Facts for Kids. Kiddle Encyclopedia.