Skipton Wood (also known as Skipton Castle Woods, Castle Wood or Springs Wood) is a 36-acre (15 ha) wood following the valley of Eller Beck to the north of Skipton behind Skipton Castle in North Yorkshire, England. The wood is owned by Skipton Castle but has been leased to the Woodland Trust. 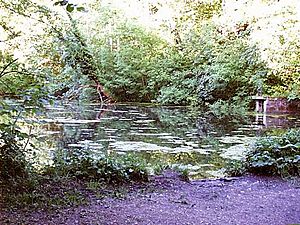 The wood was originally used by Skipton Castle primarily for hunting and fishing, although during the 18th and 19th centuries, the wood was also used to provide timber, building stone and water. The timber and stone was moved out of the wood via Springs Canal (a small branch off the Leeds and Liverpool Canal). The water was obtained by damming Eller Beck to form Long Dam, which in turn fed a small reservoir called Round Dam, also known as Mill Dam or Mill Pond. The water was used to power the former sawmill and corn mill located by the castle. Public access to the wood was first allowed by the owners of the castle in 1971 between the hours of 9 a.m. and 5 p.m.

Most of the wood is native broadleaved trees such as oak and ash and is classed as "ancient semi-natural woodland" by the Woodland Trust. There are also a large number of introduced beech and sycamore trees with a smaller number of non-native trees such as hornbeam and sweet chestnut. A small four hectare area of the wood to the north-west has been replanted with a mix of oak, Scots pine, larch and Norway spruce. This area has been designated as "replanted ancient woodland". The ground flora consists of dense carpets of wild garlic, bluebells and dog's mercury.

All content from Kiddle encyclopedia articles (including the article images and facts) can be freely used under Attribution-ShareAlike license, unless stated otherwise. Cite this article:
Skipton Wood Facts for Kids. Kiddle Encyclopedia.