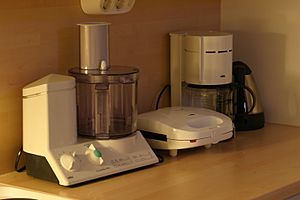 Small appliances in a kitchen: a food processor, a waffle iron, a coffee maker, and an electric kettle 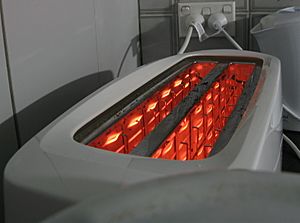 A small appliance or small domestic appliance are portable or semi-portable machines, generally used on table-tops, counter-tops, or other platforms, to accomplish a household task. Examples include microwave ovens, toasters, humidifiers, and coffeemakers. They contrast with major appliances (British "white goods"), such as the refrigerator and washing machine, which cannot be easily moved and are generally placed on the floor. Small appliances also contrast with consumer electronics (British "brown goods") which are for leisure and entertainment rather than purely practical tasks. 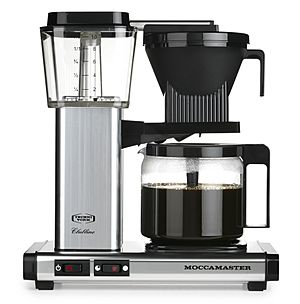 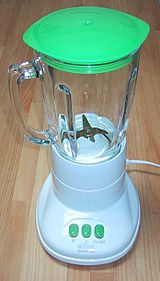 Many small appliances are powered by electricity. The appliance may use a permanently attached cord which is plugged into a wall outlet or a detachable cord. The appliance may have a cord storage feature. A few hand-held appliances use batteries, which may be disposable or rechargeable. Some appliances consist of an electrical motor upon which is mounted various attachments so as to constitute several individual appliances, such as a blender, a food processor, or a juicer. Many stand mixers, while functioning primarily as a mixer, have attachments which can perform additional functions.

A few gasoline and gas-powered appliances exist for use in situations where electricity is not expected to be available, but these are typically larger and not as portable as most small appliances. Items that perform the same function as small appliances but are hand powered are generally referred to as tools or gadgets, for example a hand cranked egg beater, a grater, a mandoline, or a hand-powered meat grinder.

Small appliances which are defective or improperly used or maintained may cause house fires and other property damage, or may harbor bacteria if not properly cleaned. It is important that users read the instructions carefully and that appliances that use a grounded cord be attached to a grounded outlet. Because of the risk of fire, some appliances have a short detachable cord that is connected to the appliance magnetically. If the appliance is moved further than the cord length from the wall, the cord will detach from the appliance.

All content from Kiddle encyclopedia articles (including the article images and facts) can be freely used under Attribution-ShareAlike license, unless stated otherwise. Cite this article:
Small appliance Facts for Kids. Kiddle Encyclopedia.