Smyrna is a town in Chenango County, New York, United States. The population was 1,280 at the 2010 census. Smyrna is named after a coastal city in ancient Greece.

The town contains a village also named Smyrna. The town is on the county's north border.

The land was settled around 1792. The town of Smyrna was founded in 1808 as "Stafford" from part of the town of Sherburne. Within a month, the name was changed to "Smyrna".

The Smyrna Elementary School was listed on the National Register of Historic Places in 1996. The Smyrna Town Hall-Opera House was listed in 2008. 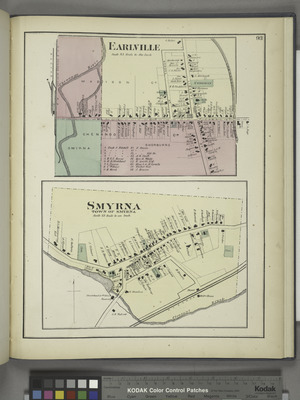 The north town line is the border of Madison County.

New York State Route 80 is an east-west highway in the town.

There were 472 households out of which 40.0% had children under the age of 18 living with them, 63.1% were married couples living together, 7.2% had a female householder with no husband present, and 21.2% were non-families. 16.3% of all households were made up of individuals and 6.8% had someone living alone who was 65 years of age or older. The average household size was 3.00 and the average family size was 3.35.

Communities and locations in the Town of Smyrna

All content from Kiddle encyclopedia articles (including the article images and facts) can be freely used under Attribution-ShareAlike license, unless stated otherwise. Cite this article:
Smyrna, New York Facts for Kids. Kiddle Encyclopedia.