Soay (Scottish Gaelic: Sòdhaigh) is an island just off the coast of Skye, in the Inner Hebrides of Scotland.

Soay lies to the west of Loch Scavaig on the south-west coast of Skye, from which it is separated by Soay Sound. Unlike its neighbours Skye and Rùm, Soay is low-lying, reaching 141 metres (463 ft) at Beinn Bhreac. The dumb-bell shaped island is virtually cut in half by inlets that form Soay Harbour (N) and the main bay, Camas nan Gall (to the S). The main settlement, Mol-chlach, is on the shore of Camas nan Gall. It is normally reached by boat from Elgol. The island is part of the Cuillin Hills National Scenic Area, one of 40 in Scotland. 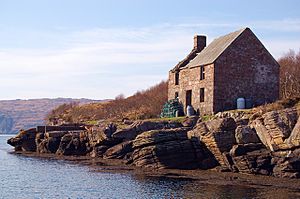 Former HQ of The Island of Soay Shark Fisheries Ltd, started - and finished - by Gavin Maxwell

The population peaked at 158 in 1851, following eviction of crofters from Skye in the Highland Clearances.

In 1946, author Gavin Maxwell bought the island and established a factory to process shark oil from basking sharks. The enterprise was unsuccessful, lasting just three years. Maxwell wrote about it in his book Harpoon at a Venture. After the failure of the business the island was sold on to Maxwell's business partner, Tex Geddes. The island had the first solar-powered telephone exchange in the world.

Previously mainly Scottish Gaelic-speaking, most of the population was evacuated to Mull on 20 June 1953, since when the island has been sparsely populated. In 2001 the population was 7. By 2003 this had dwindled to 2 and the usually resident population in 2011 was a single individual.

Local stamps were issued for Soay between 1965 and 1967, all on the Europa theme, some being overprinted to commemorate Sir Winston Churchill. As the stamps were produced without the owner's permission, they are regarded as bogus.

All content from Kiddle encyclopedia articles (including the article images and facts) can be freely used under Attribution-ShareAlike license, unless stated otherwise. Cite this article:
Soay, Skye Facts for Kids. Kiddle Encyclopedia.