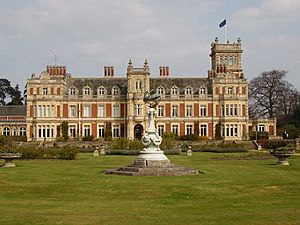 Somerleyton Hall is a country house and 5,000-acre (2,000 ha) estate near Somerleyton and Lowestoft in Suffolk, England owned and lived in by Hugh Crossley, 4th Baron Somerleyton. The hall is Grade II* listed on the National Heritage List for England, and its landscaped park and formal gardens are also Grade II* listed on the Register of Historic Parks and Gardens. The formal gardens cover 12 acres (4.9 ha). Inspired by Knepp Wildland, Somerleyton is rewilding 1,000 acres (400 ha) of the estate to which he has introduced free-roaming cattle, large black pigs and Exmoor ponies. 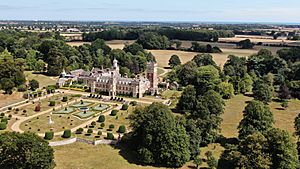 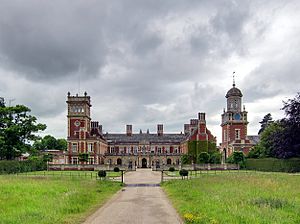 The hall is Grade II* listed designed by Prince Albert's architect John Thomas and completed in 1850. The clock tower houses a clock designed by Benjamin Vulliamy. It is on the National Heritage List for England.

Landscaped park and formal gardens are also Grade II* listed on the Register of Historic Parks and Gardens.

The formal gardens cover 12 acres (4.9 ha) and form part of the 5,000-acre (2,000 ha) estate (7.7 square miles). They feature a yew hedge maze, one of the finest in Britain, created by William Andrews Nesfield in 1846, and a ridge and furrow greenhouse designed by Joseph Paxton, the architect of The Crystal Palace. There is also a walled garden, an aviary, a loggia and a 90-metre (300 ft) long pergola, covered with roses and wisteria. The more informal areas of the garden feature rhododendrons and azaleas and a fine collection of specimen trees.

The South Lodge and the gates to Somerleyton Hall are listed Grade II.

Inspired by the success of Knepp Wildland, a pioneering rewilding project started by Sir Charles Burrell, 10th Baronet in West Sussex, Somerleyton has fenced and is rewilding 1,000 acres (400 ha) of the 5,000-acre (2,000 ha) estate (7.7 square miles), has introduced large black pigs, Exmoor ponies and 100 free-roaming cattle. The plan is to extend the scheme to 1,000 acres (400 ha) (20% of the estate), including the 150 acres (61 ha) Fritton Lake and 600 acres (240 ha) Suffolk Sandlings. Somerleyton is a founding trustee of WildEast, a charitable foundation that promotes regenerative farming and rewilding in the East Anglia.

All content from Kiddle encyclopedia articles (including the article images and facts) can be freely used under Attribution-ShareAlike license, unless stated otherwise. Cite this article:
Somerleyton Hall Facts for Kids. Kiddle Encyclopedia.