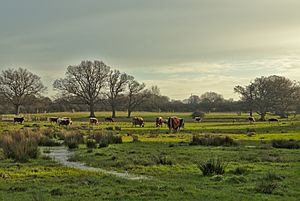 Knepp Wildland is the first major lowland rewilding project in England. It comprises 1,400 hectares or 3,500 acres of former arable and dairy farmland in the grounds of Knepp Castle, in West Sussex, England. Since 2000 when the conversion from intensive agriculture started the land now supports an 'extraordinary abundance' of many rare species including turtle doves, barbastelle bats, slow-worms and grass snakes; it has become a major nesting site for nightingales; a breeding hotspot for purple emperor butterflies; the site of the first White Stork chicks raised in the wild in England for 600 years; and is home to the first beavers living in the wild in Sussex for 400 years. 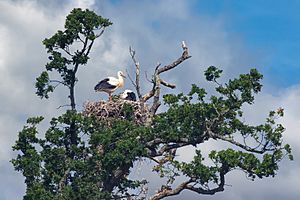 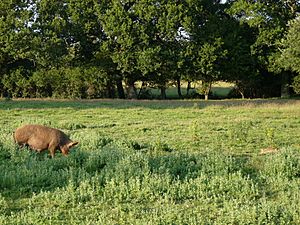 Since inheriting the 3,500 acre farm from his grandparents at the age of 21 in 1983, Sir Charles Burrell, 10th Baronet tried to run the farm profitably for 17 years. In 2000 he reluctantly decided to sell the dairy herd and farm equipment to clear mounting debts rather than take on even more debt in yet another attempt to increase the productivity. The turning-point came in 2002 he received Countryside Stewardship funding to restore the 350 acre Repton-designed parkland around the mansion that had been ploughed since World War II.

In 2001 the 370 acres (150 ha) Repton park around the old castle was seeded with a grass and local wild meadow seeds. and by the end of the year all the internal fences had been removed from the park and deer from Petworth House had been introduced.

Further inspired by a visit to the Oostvaardersplassen nature reserve in the Netherlands in 2002 and the work of Dutch ecologist Dr Frans Vera, Burrell set about establishing a 'hands-off', naturalistic grazing system across the entire estate. He used free-roaming herds of old English longhorns, Exmoor ponies and Tamworth pigs as proxies for the aurochs, tarpan and wild boar that would once have roamed the British countryside, as well as red and fallow deer.

In 2003 the project received addition funding from the Countryside Stewardship Scheme to extend the park restoration to all of the Middle Block and also the Northern Block. English Long Horn Cattle were added in the same year. along with 6 Exmoor ponies. Two Tamworth sows followed, along with a further 23 Longhorn Cattle in the Northern Block in 2004.

By 2006 1,100 acres (450 ha) of the Southern Block had been left completely unmanaged for between 1 and 6 years. The first meeting of the steering group was held the same year.

In 2009 Ravens nested at Knepp, for the first time in hundreds of years; 13 out of a total of 18 UK bat species were recorded that summer along with 15 ‘UK Biodiversity Action Plan Priority’ species (4 bats and 11 birds) and 60 invertebrate species of conservation importance and 76 additional species of moths. By March 2009 a 9-mile long perimeter fence around the Southern Block had been completed and 53 Longhorn Cattle were introduced to the area. followed shortly afterwards by 23 Exmoor Ponies, 20 Tamworth pigs and 42 Fallow deer. Purple Emperor Butterflies were spotted for the first time at Knepp that year. (by 2015 Knepp would have the largest breeding colony of Purple Emperors in the country).

In 2010 the project received Higher Level Environmental Stewardship funding, by which time Knepp was supporting some 1% of all nesting Nightingales in the UK, only 9 years into the project.

By 2011 there were some eleven singing male turtle doves at Knepp. In 2016 saw first pair of breeding falcons. The same year work was carried out on the River Adur within the project boundaries to remove the artificial banks and allow the river to flood the surrounding meadows in a more natural way. In 2012 the Environment Agency removed the largest weir and disabled the rest. and within a year Sea Trout were spotted migrating up the river.

In 2016 a Black Stork, one of the rarest of birds in Western Europe was spotted. and 441 species of moth are recorded. Between 2015 and 2016 experts recorded 62 species of bee and 30 species of wasp, including 7 bee and 4 wasp species of national conservation importance.

White Stork raised chicks for the first time in UK for 600 years at Knepp in 2020.

Beaver were introduced to Knepp in February 2020. 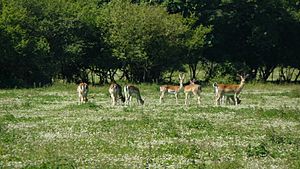 A reintroduction programme of white storks to England is in its early stages on the estate, with juvenile birds being kept in a six and a half acre pen until maturity, when they will be released. Sussex was chosen for its strong historical associations with the stork. The programme aims to establish a breeding population in Britain for the first time since 1416. 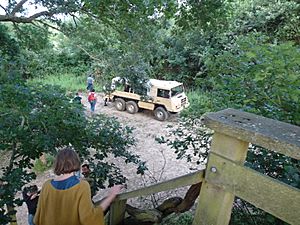 On safari at Knepp Wildland

Knepp offers camping, safaris and holiday accommodation. There are 16 miles of public and permissive footpaths and 5 viewing platforms on the estate.

The Knepp Wildland Advisory Board of over some thirty ecologists, including Dr Frans Vera and Prof Sir John Lawton, author of the 2010 'Making Space for Nature' report.

The story of the Knepp Wildland project is told in the 2018 book Wilding: The Return of Nature to a British Farm which is written by Isabella Tree, who lives at Knepp and is married to Charles Burrell and helped create the Wildland project.

All content from Kiddle encyclopedia articles (including the article images and facts) can be freely used under Attribution-ShareAlike license, unless stated otherwise. Cite this article:
Knepp Wildland Facts for Kids. Kiddle Encyclopedia.