South Cascade Glacier is a large alpine glacier in the North Cascades of Washington, USA. It is bordered on the east by 8,261-foot (2,518 m) Sentinel Peak, and is about 17 mi (27 km) north of Glacier Peak in the Glacier Peak Wilderness. Meltwater from the glacier flows directly into South Cascade Lake, which feeds the South Fork Cascade River, which is a tributary of the Skagit River. 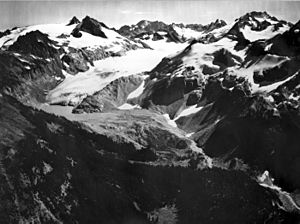 All content from Kiddle encyclopedia articles (including the article images and facts) can be freely used under Attribution-ShareAlike license, unless stated otherwise. Cite this article:
South Cascade Glacier Facts for Kids. Kiddle Encyclopedia.