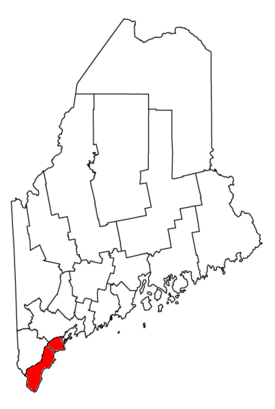 The Southern Maine Coast is a region of the U.S. state of Maine. It commonly includes York County and Cumberland County. Some notable towns are Kittery, York, Wells, Ogunquit, Kennebunkport, Saco, and Scarborough.

One of the first parts of Maine to be settled, but the early in the nineteenth century the region was one of the most prosperous in the United States being a ship building and trading center, and much architecture survives from this era. Today it is the heart of Maine's tourism industry, containing 90% of the state's sandy beaches.

The seaside communities of the Southern Maine Coast have popular beaches at York Beach, Goose Rocks, and Old Orchard Beach, and offer a large number of outlet malls, the most famous of which is the L. L. Bean flagship store (just up the coast in Freeport). The area also has several fine museums such as the Seashore Trolley Museum and the Portland Museum of Art. Area restaurants emphasize a wide variety of local seafood, especially lobster, in settings ranging from shacks to fine dining at its highest. The Southern Maine Coast has the highest population growth of any region in the state due to large numbers of people from Massachusetts and New Hampshire who vacation or own second homes there deciding to permanently relocate.

All content from Kiddle encyclopedia articles (including the article images and facts) can be freely used under Attribution-ShareAlike license, unless stated otherwise. Cite this article:
Southern Maine Coast Facts for Kids. Kiddle Encyclopedia.