York is a town in York County, Maine, United States, near the southern tip of the state. The population in the 2020 census was 13,723. Situated beside the Atlantic Ocean on the Gulf of Maine, York is a well-known summer resort town. It is home to three 18-hole golf clubs, four sandy beaches, and Mount Agamenticus. It includes the villages of York Village, York Harbor, York Beach and Cape Neddick. 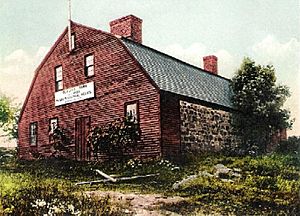 First settled by Europeans in 1624, the plantation was originally called Agamenticus, the Abenaki term for the York River. In 1638, settlers changed the name to Bristol after Bristol, England, from which they had immigrated. Envisioning a great city arising from the wilderness, Sir Ferdinando Gorges, lord proprietor of Maine under the Plymouth patent, named the capital of his province Gorgeana. In 1642, by charter of King Charles I, Gorgeana became the first incorporated city in America.

Following Gorges' death, the Massachusetts Bay Company claimed his dominion. In 1652, York, Massachusetts, was incorporated from a portion of Gorgeana, making it the second oldest town in Maine after Kittery, incorporated two years earlier. It was named for York, England. But control of the region was contested between New England and New France, which incited Native Americans to attack English settlements throughout the French and Indian Wars. 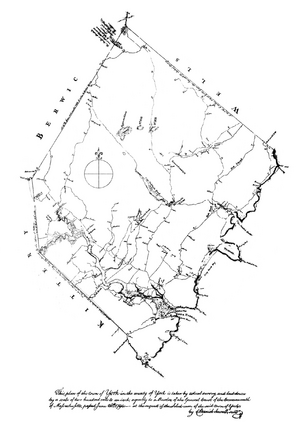 The first Congregational church of York was organized in 1672, by Rev. Shubael Dummer, the son of Richard Dummer and uncle to William Dummer, who became acting governor of the Province of Massachusetts Bay.

During King William's War, York was destroyed in the Candlemas Massacre of 1692. During the raid by the Abenakis, Dummer was shot at his own front door. About 50 others were slain and near 100 carried away captive, among them Dummer's wife, Lydia, and their son, where "through snows and hardships among those dragons of the desert she also quickly died"; nothing further was heard of the boy.

The final local Indian attack occurred at the Cape Neddick area during Dummer's War in 1723. Hostilities diminished with the French defeat at the Siege of Louisbourg (1745), and ceased altogether with the 1763 Treaty of Paris. Several famous American authors have been known to spend their summer months in York, including Mark Twain.

As provincial capital and site of the Royal Gaol (Jail), York prospered. Numerous wharves and warehouses serviced trade with the West Indies. Agricultural products and lumber were shipped in exchange for sugar, molasses and other commodities. One notable merchant was John Hancock, whose establishment is now a museum. Following the Revolution, however, President Thomas Jefferson's Embargo Act of 1807 crippled trade. York, bereft of status as capitol, would not again be prosperous until after the Civil War, when its sea breezes and colonial charm, including old homes like the John Sedgley Homestead, attracted tourists.

Like Bar Harbor and Newport, Rhode Island, York became a fashionable summer resort, and retains many distinctive examples of Gilded Age architecture, particularly in the Shingle Style. A cluster of historic buildings in the center of York Village are maintained as museums by the Old York Historical Society. 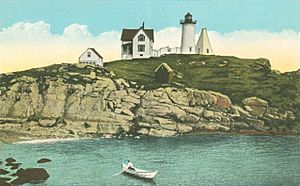 During summer months, summer residents and tourists (chiefly families) throng Short Sands Beach, which is in the district of York Beach itself, as well as Long Sands Beach, the town's longest with more than a mile of sand stretching between York Beach and York Harbor. Dozens of five-star hotels and other accommodations operate in the York Beach area, although most close after summer.

Many spots throughout The Yorks have picturesque views of the famous Cape Neddick Light at Nubble Rock, which has figured in both artists' work and souvenirs of the Maine coast. Visible in clear weather is the 133 foot (40 meter) tall Boon Island Light on Boon Island, located 6.2 miles (10.0 km) off York. Old-fashioned restaurants, like the Goldenrod, maintain the historic character of the York Beach area. 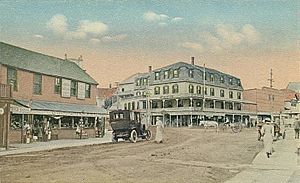 There were 5,440 households, of which 26.0% had children under the age of 18 living with them, 56.1% were married couples living together, 7.1% had a female householder with no husband present, 3.0% had a male householder with no wife present, and 33.8% were non-families. 28.5% of all households were made up of individuals, and 15.1% had someone living alone who was 65 years of age or older. The average household size was 2.30 and the average family size was 2.82. 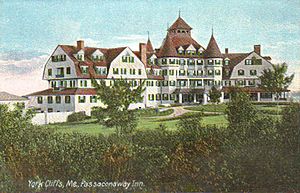 All content from Kiddle encyclopedia articles (including the article images and facts) can be freely used under Attribution-ShareAlike license, unless stated otherwise. Cite this article:
York, Maine Facts for Kids. Kiddle Encyclopedia.