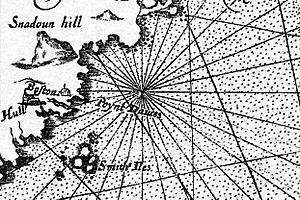 The mountain labeled Snadoun Hill in 1616

Mount Agamenticus is a 692 ft (211 m) high monadanock in the town of York, Maine. The greater Agamenticus region covers nearly 30,000 acres (12,000 ha) in the southern Maine towns of Eliot, Ogunquit, South Berwick, Wells and York. The area surrounding the summit is a park reservation which provides habitat for wildlife and a venue for recreation. At the mountain peak is the burial place of Mi'kmaq Chief St. Aspinquid.

Mount Agamenticus is also affectionately known as "Big A," the nickname of a ski slope that once operated on its northeast flank. Historically, it was "a noted landmark for sailors". Though only 692 ft (211 m) above sea level, it is high enough that from its peak on a clear day one can see the skyscrapers of Boston to the south, Cape Elizabeth and the entrance to Casco Bay to the north and the Presidential Range, including Mount Washington, to the west. Looking out to sea, the Isles of Shoals - about 10 mi (16 km) off York - and Boon Island - about 6 mils (0.15 mm) from the coast - are also clearly visible.

In 1614, Captain John Smith explored and charted the Gulf of Maine. Upon returning to London, he presented his record of the New World, complete with aboriginal place names, to Prince Charles, "...humbly entreating his Highnesse hee would please to change their barbarous names for such English, as posteritie might say Prince Charles was their God-father..." He complied, and his choices were featured on the map published in 1616 that accompanied Smith's A Description of New England. On paper, the mountain's Indian name, "Sassanows," became "Snadoun Hill." But many royal recommendations were not retained. Instead, the mountain would assume the general name of the York settlement of 1630, the "Plantation of Agamenticus," which itself took the Abenaki name for the York River.

St. Aspinquid (St. Aspenquid) was a Mi'kmaq sachem who was murdered in 1696 and was declared a martyr and buried atop Mount Agamenticus.

According to legend, Saint Aspinquid (sometimes Aspenquid), an Indian chief, was buried atop Mount Agamenticus in May 1682. He was born in May 1588, and after converting to Christianity, spread the gospel to tribes across the continent. His funeral, at which 6,712 animals were allegedly sacrificed, was attended by hundreds, even thousands, of Native Americans. Numerous people have written and questioned the legendary account even to the point of questioning the existence of St. Aspinquid. Some have suggested the Saint is a fanciful version of real Chief Passaconaway—is debated. In the 1881 essay A Winter Drive, Sarah Orne Jewett remarks that "...I could never trace this legend beyond a story in one of the county newspapers, and I have never heard any tradition among the people that bears the least likeness to it."

A symbolic cairn on the summit stands as memorial to the Aspinquid legend.

Nowadays there is a large cell phone mast at the top, arrayed with various other antenna. It is one of the best places for viewing hawks in New England.

Mount Agamenticus can be seen on a clear day from the lookout and the fire control tower at Halibut Point State Park in Rockport, Massachusetts.

Partial panoramic view from the summit of Mount Agamenticus

In addition to a road to the summit and limited parking there, the mountain has a network of trails for hiking. Its short access trail from the main parking area at the base leads to the ring trail, which in circles the mountains summit. Feeder trails off of it offer access to the top.

All content from Kiddle encyclopedia articles (including the article images and facts) can be freely used under Attribution-ShareAlike license, unless stated otherwise. Cite this article:
Mount Agamenticus Facts for Kids. Kiddle Encyclopedia.