Southlake is a city located predominantly in Tarrant County with minor areas extending into Denton County in the U.S. state of Texas. Southlake is a suburb of Dallas/Fort Worth. As of the 2019 census estimate it had a population of 32,376.

The Southlake area was settled by pioneers in the 1840s, but was not incorporated as Southlake until 1956, four years after Grapevine Lake was finished. Before incorporation, the settlements of Whites Chapel, Dove, Union Church and Jellico made up present day Southlake. The area remained rural until the completion of the DFW International Airport in the 1970s. Due to the close proximity to the airport, Southlake became a boom-burb throughout the 1980s, 1990s and 2000s. As of 2012, Southlake's population is almost at full capacity, with around 27,000 residents. The expected build-out population is projected around 34,000 residents.

In the early 1990s when Southlake began developing master-planned neighborhoods, the minimum lot size was 1-acre (4,000 m2). Later the City of Southlake reduced the minimum lot size to 1/2 acre, and later 1/3 of an acre. These master-planned upscale neighborhoods began popping up all over the western portion of Southlake Boulevard. Some of the larger upscale neighborhoods developed in the 90's along Southlake Boulevard include The Hills of Monticello, Monticello Estates, Stoneridge Lakes, Myers Meadow, Stone Lakes, Timber Lake, Southridge Lakes and Timarron, which includes the Timarron Country Club. In the 2000s when the earlier neighborhoods were finishing out, Southlake began developing portions of its picturesque countryside into luxury neighborhoods. Some of the newer luxury neighborhoods include Clariden Ranch, Estes Park, Stratford Park, Cambridge Place, Shady Oaks, Westwick Hills, The Enclave, Laurelwood Park, Villas Del Sol, Palomar Estates, The Reserve of Southlake, Coventry Manor, Autumn Creek Estates and Versailles. 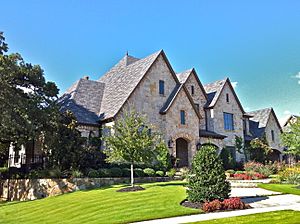 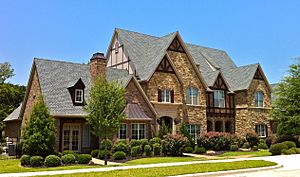 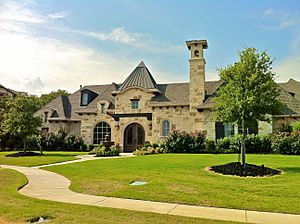 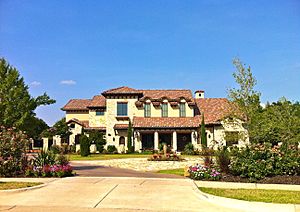 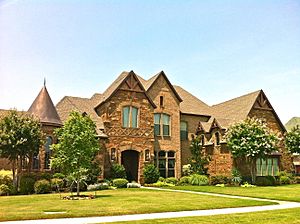 Old World home, one of the most common style of new homes 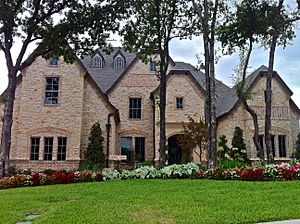 Sabre Holdings, an S&P 500 company, is headquartered in Southlake in the Solana business park. Industrial businesses include gasoline storage and distribution and concrete works on the east side of town off Highway 114 near DFW Airport.

Southlake is well known for its Southlake Town Square project, a shopping center located on State Highway 114 and Southlake Boulevard. A plan was approved in March 2005 that allowed the Town Square's area to be doubled. The new additions to Town Square were completed in the summer of 2006, making it one of the most popular shopping centers in the Metroplex.

According to Southlake's 2020 Comprehensive Annual Financial Report, the top employers in the city are:

The vast majority of Southlake is in the 100% TEA Exemplary-rated Carroll Independent School District. This school district contains the following schools:

All Carroll ISD schools share the logo and mascot of the dragon. The school district is currently ranked by the Texas Education Agency as the largest all exemplary school district in the state.

A number of private schools are also located in Southlake, among them:

All content from Kiddle encyclopedia articles (including the article images and facts) can be freely used under Attribution-ShareAlike license, unless stated otherwise. Cite this article:
Southlake, Texas Facts for Kids. Kiddle Encyclopedia.