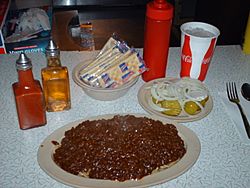 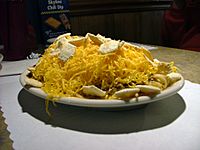 Spaghetti Red is a spaghetti dish where the noodles are covered with chili. It is served in the central United States and originates at Fred and Red's in Joplin, Missouri. Typically a mild, bean-less chili is used in spaghetti red, such as the type used on hot dogs.

Spaghetti Red can be served with hot sauce, vinegar, ketchup, and onions are sometimes used for variety. Additional condiments such as pickles, mild shredded cheddar cheese, parmesan cheese and even mustard are sometimes used.

All content from Kiddle encyclopedia articles (including the article images and facts) can be freely used under Attribution-ShareAlike license, unless stated otherwise. Cite this article:
Spaghetti Red Facts for Kids. Kiddle Encyclopedia.