The spiny dogfish (Squalus acanthias) is one of the most common and well known species of dogfish. It is a small species of shark, with an average length of 28-39 inches (70-100 cm), and reaching a maximum weight of 9.8 kg.

The dogfish is found in the Atlantic and Pacific Ocean, and can be found from the surface to depths as deep as 1,460 metres. The spiny dogfish is feeds mainly on pelagic fish such as herring, menhaden, capelin, sand lance, and mackerel.

The dorsal surface of the dogfish is slate-coloured and may have a brownish cast. There are rows of white spots along each side, from above the pectoral fins to above the pelvic fins. These spots are more visible on immature spiny dogfish, and they fade as the shark matures. With some individuals, the spots completely disappear. The edges of the dorsal fins and the caudal fin have a dusky-colour at birth, but this colour quickly fades. The ventral surface of the dogfish ranges from pale grey to pure white.

The head of a spiny dogfish

In the western Atlantic, the spiny dogfish ranges from Greenland to Argentina, and in the eastern Atlantic it is found from Iceland and the Murmanski Coast (Russia) to South Africa, including the Mediterranean Sea and the Black Sea. In the western Pacific, the dogfish occurs from the Bering Sea to New Zealand, while in the eastern Pacific, this species is found from the Bering Sea to Chile.

Spiny dogfish are benthopelagic, meaning that they are found just above the bottom of the ocean. They are found from the surface to depths as deep as 1,460 metres. Spiny dogfish can be found in brackish water, but prefer seawater, and are commonly found in waters with the temperature of 7-15 °C. Spiny dogfish are found inshore and offshore, over continental and insular (island) shelve, and upper slopes. They are often found in enclosed bays and estuaries. They have been reported to enter freshwater but cannot survive there for more than a few hours.

Spiny dogfish have been found in the stomachs of cod, red hake, and goosefish, as well as other dogfish. Larger species of sharks, as well as seals and Killer whales also feed on the spiny dogfish. To defend itself, the dogfish curls into a bow, and strikes at predators with its spines on the dorsal fins.

The spiny dogfish usually feeds in groups. They feed mainly on pelagic fish such as herring, menhaden, capelin, sand lance, and mackerel, often consuming large numbers of them. They have been known to bite through fishing nets to be able to feed on the caught fish, usually releasing most of the fish. This has given the dogfish a bad reputation among fishermen. Other food items of this species includes molluscs (such as squid and octopus), crustacea (such as shrimp and crab), jellyfish, sea cucumber, algae, smaller sharks, and shark egg cases.

The gestation period of the spiny dogfish lasts up to 2 years. Spiny dogfish are ovoviviparous, meaning that the embryos develop inside eggs inside the female, and are nourished by yolk-filled sacs. Finally, the female gives birth to 1-20 pups, each one measuring around 20 to 33 centimeters. The spiny dogfish lives to the age of 20-75 years. 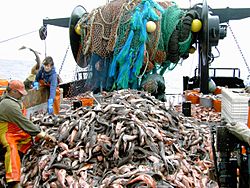 A catch of Spiny dogfish

The dogfish poses little threat to humans, but if it is not handled properly, the spines on its dorsal fins can give a harmful wound. Also, the spiny dogfish has earned itself a bad reputation among fishermen due to its habit of biting through fishing nets to get at any fish which is caught in the nets.

The spiny dogfish is the most common living shark, yet two populations in the northwest and northeast Atlantic are at great risk due to overfishing. This shark is caught for food, liver oil, and is used to make sand paper, vitamins, leather, fertiliser, and pet food. Between 1900 and 1910, when the dogfish was at its peak abundance, it was estimated that up to 27 million spiny dogfish were caught off the Massachusetts coast every year.

Due to their long gestation period and the low number of pups they give birth to at a time, the spiny dogfish must be managed carefully. This species is extremely vulnerable to overfishing and is currently on the brink of collapse.

Commercial fishermen target mature females because they grow to larger sizes than males. The fishing of spiny dogfish increased dramatically in the U.S.A during the 1990s, resulting in the population of mature females to decrease by 75%, leading to low number of pups. In 2001, the Atlantic States Marine Fisheries Commission (ASMFC) voted to extend an emergency action that closes state waters to fish for the vulnerable dogfish. This was in response to heavy fishing that devastated dogfish populations during the 1990s.

In late 2000, a fishery management plan for the spiny dogfish began to develop, followed by its approval in November 2002. Federal and state recovery plans are currently in place but are continually challenged. The National Marine Fisheries Service, with new data predicting the collapse of the spiny dogfish populations, closed federal waters to dogfish fishing in July 2003. The spiny dogfish is currently listed as Vulnerable by the IUCN.

All content from Kiddle encyclopedia articles (including the article images and facts) can be freely used under Attribution-ShareAlike license, unless stated otherwise. Cite this article:
Spiny dogfish Facts for Kids. Kiddle Encyclopedia.