Kids Encyclopedia Facts
This page is about the city in Alberta. For other uses, see Spruce Grove (disambiguation).

Spruce Grove is a city that is 11 km (6.8 mi) west of Edmonton, Alberta in Canada. The city is adjacent to the Town of Stony Plain and is surrounded by Parkland County.

Spruce Grove is home to the Horizon Stage Performing Arts Centre, a local theatre, and the TransAlta Tri Leisure Centre, a recreation facility shared with Stony Plain and Parkland County.

Jennifer Heil, the freestyle skier who won the first gold medal for Canada in the 2006 Winter Olympics in Turin, Italy, and a silver medal at the 2010 Winter Olympics is from Spruce Grove, as is Carla MacLeod, a member of the 2010 Canada women's national ice hockey team.

Spruce Grove is located near the province's geographical centre, at 30 kilometres (19 mi) from downtown Edmonton and 14 km (8.7 mi) from Edmonton's city limits. It is part of the Edmonton Capital Region. 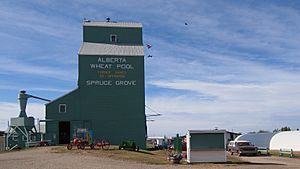 The Spruce Grove Art Gallery is located in the Melcor Cultural Centre and is operated by the Allied Arts Council of Spruce Grove. The gallery hosts ongoing shows for original art created by its members, made up of artists from mainly the Spruce Grove, Stony Plain and Parkland County area.

Horizon Stage hosts many plays and acts throughout the year, as well as a lot of community theatre. Spruce Grove also has a 7 screen theatre complex which opened in the fall of 2007.

Another cultural facility within the city is the Spruce Grove Grain Elevator Museum.

The TransAlta Tri Leisure Centre, opened in 2002, provides a pool, soccer fields, a gymnasium, workout gym, and ice rinks to the people of Parkland County. Spruce Grove has bike trails winding throughout the city, called the Heritage Grove Trail, where bike riders can ride for hours through lush forest. On June 7, 2008, Spruce Grove held the grand opening of the West District Park, which features two full artificial surface fields for football, soccer and other activities. The Edmonton Eskimos donated $10,000 towards the event and held practice at the facility as part of the first day activities.

Spruce Grove has an abundant number of youths and adults involved in amateur sports, that run year round. Box lacrosse runs from March to July under the organization Parkland Posse [1], which pulls young people from the Tri communities of Spruce Grove, Stony Plain and Parkland County. Hockey runs from September to April, soccer and rugby run from May to October, football runs from July to December and baseball runs from March to October. The Spruce Grove Saints are a Junior A hockey team that play in the Alberta Junior Hockey League.

As of 2021[update], the Spruce Grove Metro Ballpark is under construction. Upon completion, it will become the home stadium of the Edmonton Prospects.

Highways
Two highways pass through Spruce Grove, Highway 16 (Yellowhead Highway) and Highway 16A. Highway 16 has no traffic lights but has two exits into Spruce Grove, while Highway 16A has several traffic intersections. Travelling east of either of these highways will lead to Edmonton. Travelling west on Highway 16A will lead to Stony Plain, and going west on either highway will lead to Edson, Hinton, and eventually Jasper.
Local streets
The majority of the streets in Spruce Grove use a standard naming system. Their names share a first letter with that of its subdivision. For example, all streets start with M in Millgrove subdivision; in Woodhaven, they all start with W. Only in the original subdivision of Broxton Park and the downtown core is this naming convention not utilized.
Rail
The Canadian passenger train travels through the city three times a week, in each direction, between Vancouver and Toronto. However, the nearest stop is at Edmonton.
Transit
Edmonton Transit System offers a commuter transit route from Spruce Grove to Edmonton, peak hours only.

There is also a local transit service run by the city for transportation within the city boundaries.

Spruce Grove is part of the Parkland School Division No. 70. The following public schools are located in Spruce Grove.

Spruce Grove is part of the Evergreen Catholic Separate Regional Division No. 2. The following separate schools are located in Spruce Grove.

All content from Kiddle encyclopedia articles (including the article images and facts) can be freely used under Attribution-ShareAlike license, unless stated otherwise. Cite this article:
Spruce Grove Facts for Kids. Kiddle Encyclopedia.