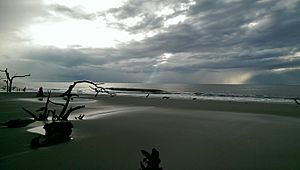 A beach on the island

St. Catherines Island is one of the Golden Isles on the coast of the U.S. state of Georgia, 20 miles (80 km) south of Savannah in Liberty County. The island is ten miles (16 km) long and from one to three miles (5 km) wide, located between St. Catherine's Sound and Sapelo Sound. More than half of its 14,640 acres (59 km²) are tidal marsh and wetlands. About half of it is salt marshes, about a quarter is wooded, and it has "fine" beaches. It is owned by the Saint Catherines Island Foundation and is not open to the public, aside from the beach below the mean high water line.

The island has been inhabited for at least 4000 years, and was a Guale settlement by 1576. It was the site of the first Spanish outpost in Georgia. By 1587 it was the northernmost permanent Spanish outpost on the Atlantic Coast. Spanish colonies were planted as far north as Chesapeake Bay, but none lasted more than a year or two. During the 17th century, the mission of Santa Catalina de Guale, located on the island from 1602 to 1680, was the center of the Guale missionary province of Spanish Florida. David Hurst Thomas has focused on Spanish period mission archaeology on St. Catherine's Island. Currently, archaeology of the shell ring on St. Catherines Island is spearheaded by David Hurst Thomas and Matthew C. Sanger. The archeological excavations at the shell ring have uncovered copper objects closely corresponding to those found at hunter-gatherer sites in the Great Lakes region, suggesting that traders may have travelled all the way from the Midwest to St Catherines Island.

In 1766 the island was leased by Button Gwinnett, a signer of the Declaration of Independence. It was run as a plantation for nearly a century, until the Civil War ended.

During the Civil War, the island was granted to the Freedmen's Bureau by Sherman's Special Field Orders No. 15. On the island, the agent Tunis Campbell, dubbed "the most feared man in Georgia", established a government with schools. He also established a militia that worked to keep white people off the island. In the Fall of 1865, after Congress repealed Sherman's Orders, African-American Union soldiers were sent to evict Campbell from his island, as he would not fire upon other blacks.

The 1893 Sea Islands Hurricane caused catastrophic destruction, sweeping seawater across the entire island. Only one person who remained on the island survived, and all buildings were destroyed.

In 1943 Edward John Noble bought the island, using it to raise Angus cattle. In 1968, ten years after his death, the island was transferred to the Edward J. Noble Foundation.

The island is now owned by the St. Catherines Island Foundation, and the island's interior is operated for charitable, scientific, literary, and educational purposes. The foundation aims to promote conservation of natural resources, the survival of endangered species, and the preservation of historic sites, and to expand human knowledge in the fields of ecology, botany, zoology, natural history, archaeology, and other scientific and educational disciplines. The island is involved with the conservation of the ring-tailed lemur. It was declared a National Historic Landmark (and automatically placed on the National Register of Historic Places) in 1969.

All content from Kiddle encyclopedia articles (including the article images and facts) can be freely used under Attribution-ShareAlike license, unless stated otherwise. Cite this article:
St. Catherines Island Facts for Kids. Kiddle Encyclopedia.