St. Louis Arena (known as the Checkerdome from 1977 to 1983) was an indoor arena in St. Louis, Missouri. The country's second-largest indoor entertainment venue when it opened in 1929, it was home to the St. Louis Blues and various other sports franchises. The Arena sat across I-64 from Forest Park's Aviation Field.

At the conclusion of the 1904 World's Fair, St. Louis ended its long tradition of annually hosting large indoor agriculture and horse shows. The city tore down its huge St. Louis Exposition and Music Hall and built the St. Louis Coliseum which was aimed at individual events such as boxing matches.

In 1928 the National Dairy Show offered the city the opportunity to become the permanent location for its annual two-week meeting of dairymen and their prize animals. With no public funds available, a group of businessmen raised private funding for what was projected as a $2 million building. The National Exposition Company in charge of the project hired Gustel R. Kiewitt as architect and the Boaz-Kiel Construction Company as general contractor.

Kiewit's design called for a lamella roof supported by 20 cantilever steel trusses, eliminating the need for view-obscuring internal support pillars. The lamella design consisted of Douglas fir ribs, 3.75 inches (9.5 cm) thick, 17.5 inches (44 cm) wide and 15 feet (4.6 m) long, fitted together diagonally and giving the appearance of fish scales. The huge structure was completed in 1929, just over a year after construction began. At 476 feet (145 m) long and 276 feet (84 m) wide, it was behind only Madison Square Garden as the largest indoor entertainment space in the country. A 13-story building could have been erected inside of it.

The Arena was not well-maintained after the 1940s, and its roof was damaged by a February 1959 tornado. After repairs, it was re-opened as the home of the Central Hockey League's St. Louis Braves, a Chicago Black Hawks farm team. The renovations included the removal of the fencing that enforced segregation, dating back to the time of the St. Louis Eagles.

On March 19, 1971 the St. Louis Stars hosted the 1971 NASL Professional Hoc-Soc Tournament here, which was the first indoor soccer tournament sanctioned by a Division One professional league in U.S. history.

In the 1973 NCAA Basketball Final, the UCLA Bruins and legendary coach John Wooden defeated Memphis State 87–66, behind 44 points from Bill Walton who went 21 of 22 from the floor. Over 19,000 were in attendance at the Arena.

On February 13, 1974, the St. Louis Stars played host to the Red Army team at the Arena in the final match of Russian squad's three-city indoor soccer tour of North America. Attendance for the match was 12,241.

In the 1978 NCAA Basketball Final, the Kentucky Wildcats and coach Joe B. Hall defeated Duke 94-88, led by the 41-point effort of Jack Givens.

After the 1968 departure of the NBA's St. Louis Hawks, the Spirits of St. Louis brought professional basketball back to St. Louis when the Carolina Cougars franchise moved to St. Louis. The Spirits played in the Arena for the final two seasons of the American Basketball Association (ABA), 1974–75 and 1975–76. Their announcer on KMOX radio was a young Bob Costas. Young players such as Steve Jones ("Snapper", now a TV analyst), Marvin Barnes ("Bad News), Maurice Lucas and Moses Malone all played for the Spirits during their tenure at the Arena. The team was not included in the ABA–NBA merger in 1976, when the Indiana Pacers, San Antonio Spurs, Denver Nuggets and New York Nets joined the NBA. The Spirits and the Kentucky Colonels were disbanded. Spirits owners Ozzie and Daniel Silna pulled off a coup in their dissolution agreement when the ABA–NBA merger was finalized. The Silnas negotiated to receive a portion of TV monies in perpetuity, a deal that netted them over $250 million before they were bought out by the NBA in 2014 for a reported $500 million. 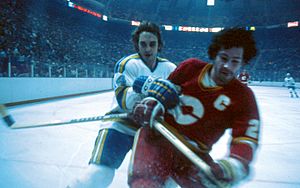 By the time the NHL's St. Louis Blues began playing at the Arena, it had fallen into such poor condition that it had to be heavily renovated in time for the 1967–68 season. As a condition of getting the expansion franchise, Blues owner Sid Salomon Jr. purchased the Arena from the Chicago Black Hawks, and spent several million dollars renovating the building and adding some 3,000 seats to bring the total to almost 15,000. It never stopped being renovated from that day on, and held almost 20,000 seats by the time the Blues left the Arena in 1994. Many fans considered its sight lines the best of any arena in the league, which is remarkable considering that it was not originally built for hockey. It was also known as one of the loudest arenas in the league.

In 1977, the Arena and the Blues were purchased by Ralston Purina, which rechristened the building the Checkerdome after the company's checkerboard logo. By 1983, the cereal and pet food corporation had lost interest in the Blues and the Arena, and forfeited the team to the league. The team was nearly moved to Saskatoon, Saskatchewan before it was purchased by Harry Ornest, a Los Angeles-based businessman, who promptly returned the Arena to its original name.

After the Blues moved to their new home, the venue now known as Enterprise Center, during the 1994 offseason, the final event at the St. Louis Arena was a concert by Christian artist Carman Licciardello.

St. Louis Arena on February 27, 1999, the day of its controlled demolition

As a condition for the private financing of the demolition of city-owned Kiel Auditorium and the construction of privately owned Kiel Center (now the Enterprise Center) on the same Downtown site, local business group Civic Progress, Inc. insisted that the Dogtown-neighborhood would not be allowed to compete with Kiel Center for any events, while the insurance burden for the building was left with the City of St. Louis. With no income allowed for the arena while insurance expenses continued, the building sat vacant while pressure built on the city government to either make it revenue-producing (essentially impossible under the Civic Progress-imposed non-compete clause) or raze it. The arena remained vacant for nearly five years.

A business/residential development, The Highlands, now occupies the land that the St. Louis Arena called home, including the following:

Sports teams that called the Arena home include:

All content from Kiddle encyclopedia articles (including the article images and facts) can be freely used under Attribution-ShareAlike license, unless stated otherwise. Cite this article:
St. Louis Arena Facts for Kids. Kiddle Encyclopedia.