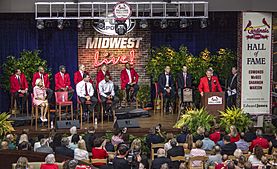 In January, 2014, Cardinals chairman and chief executive officer William DeWitt, Jr., announced a plan for an annual formal Cardinals Hall of Fame induction process. Included components of the voting and induction process are a "Red Ribbon" committee of baseball experts, a six-week fan voting process in the spring, and an enshrinement ceremony in the summer. All former Cardinals already enshrined in the National Baseball Hall of Fame and Museum in Cooperstown, New York and those honored with their number retired were automatically enshrined into the inaugural class of the Cardinals Hall of Fame on August 16, 2014.

To be eligible for the Cardinals Hall of Fame, a player must have played three seasons for the Cardinals and have been retired from Major League Baseball for at least three years. Players are divided into two categories – "modern players" and "veteran players." Players who have been retired 40 or more years are classified as veteran players. Each year, a "Red Ribbon" committee selects one veteran player to be inducted and nominates another 6 to 10 players for a fan vote. The vote is then accomplished on the Cardinals official MLB.com website. The two players with the highest online vote total are inducted. Additionally, the team may opt to elect personnel who fulfilled other roles besides playing, such as a coach, broadcaster or front office personnel. The team creates and displays a plaque for each elected member of the Hall. The plaques are created by the same company that creates the plaques for the National Baseball Hall of Fame in Cooperstown. Each inductee is also provided with a red jacket that is to be worn at all official team ceremonies and functions. A total of 26 members were inducted for the first class of 2014.

Positions that are listed were played the equivalent of a full season for the Cardinals.

The Cardinals Hall of Fame and Museum contains over 15,000 total artifacts and 80,000 photographs, second only to the National Baseball Hall of Fame as the largest collection of baseball antiquities. The sections of the Museum include: the Plaque Gallery, a Sportsman's Park Room, a Busch Stadium II Room, a Busch Stadium III Room, a Championship Gallery, a Uniform Timeline, a Look at the Current Cardinals, a St. Louis Browns Display, a St. Louis Stars Display, and a Temporary Exhibit Room that has included displays on Stan Musial and a history of the Cardinals Farm System.

All content from Kiddle encyclopedia articles (including the article images and facts) can be freely used under Attribution-ShareAlike license, unless stated otherwise. Cite this article:
St. Louis Cardinals Hall of Fame Museum Facts for Kids. Kiddle Encyclopedia.