St. Stephan is a municipality in the Obersimmental-Saanen administrative district in the canton of Bern in Switzerland. The namesake is the First Century martyr. 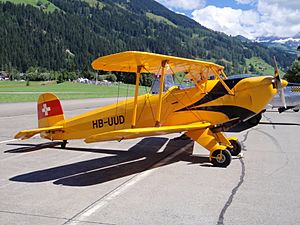 St. Stephan is first mentioned in 1352 as Sant Stephan.

The village grew out of a Burgundian royal estate located in a pass to Valais. In 994 it the royal family donated St. Stephan to Selz Abbey. Eventually the village became part of the lands of the Freiherr of Raron. In 1456 it passed to the Bubenberg family and then in 1494 was acquired by the city of Bern.

The village church of St. Stephan was built in the Early Middle Ages. The original building was renovated and expanded in the 12th and 15th centuries. It was originally a filial church of the parish church in Zweisimmen. In 1335 Interlaken Abbey took over the patronage of St. Stephan. In the 15th century the residents began attempting to break away from the Abbey and form their own parish. Despite authorization from the Pope in 1430 and a decision of the Council of Basel in 1433, the Abbey remained in control. Finally, in 1525, the villagers were released from the Abbey's patronage and formed their own parish. Three years later, in 1528, Bern adopted the new faith of the Protestant Reformation. Interlaken Abbey and majority of the Bernese Oberland resisted the new faith. However, in the same year, Bern forced the Oberland, including St. Stephan, to convert.

Traditionally the villagers of the municipality raised crops on the valley floor for local consumption. Beginning in the 16th century, they started to trade for grain from the cities of the Swiss Plateau and raised cattle for meat, milk and cheese on the valley floor and in seasonal alpine herding camps. In 1912 a railroad connected St. Stephan with Zweisimmen and tourists began to flock to the alpine village. During World War II, in 1944, a military airport opened in the municipality. It became a civilian airport in the later 1990s. Today some of the residents still raise cattle or produce cheese or work in the tourist industry. About one-third of the working population commute to Zweisimmen or other towns for work. 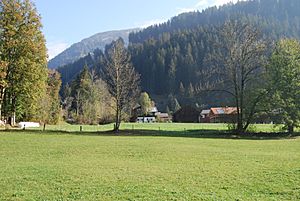 During the same year, housing and buildings made up 0.9% and transportation infrastructure made up 1.2%. A total of 26.8% of the total land area is heavily forested and 3.4% is covered with orchards or small clusters of trees. Of the agricultural land, 9.8% is pasturage and 40.7% is used for alpine pastures. All the water in the municipality is flowing water. Of the unproductive areas, 6.9% is unproductive vegetation and 7.5% is too rocky for vegetation.

St. Stephan lies in the Bernese Oberland in the Simmental between Zweisimmen and Lenk. The municipality includes Albristhorn (2,762 m (9,062 ft)).

The municipality consists of the cooperative farming villages (Bäuerten) of Ried, Häusern, Grodey, Matten, Fermel, Obersteg and Zu Hähligen. There is not a place known as St. Stephan.

At the bottom of the valley is a 2,050 m (6,730 ft) paved airfield. A private firm controls the service. The field was built for the military, but it is used for both civilian and military purposes.

On 31 December 2009 Amtsbezirk Obersimmental, the municipality's former district, was dissolved. On the following day, 1 January 2010, it joined the newly created Verwaltungskreis Obersimmental-Saanen.

The blazon of the municipal coat of arms is Argent on a Mount Vert St. Stephen proper passant haloed Or clad Purpure holding in his dexter hand and reading an open book bound Gules and in his sinister a Palm Branch Vert and carrying in a Pouch Stones of the first.

All content from Kiddle encyclopedia articles (including the article images and facts) can be freely used under Attribution-ShareAlike license, unless stated otherwise. Cite this article:
St. Stephan, Switzerland Facts for Kids. Kiddle Encyclopedia.