St James' Church is in the village of Ince, Cheshire, England. The church is recorded in the National Heritage List for England as a designated Grade II* listed building. It is an active Anglican parish church in the diocese of Chester, the archdeaconry of Chester and the deanery of Frodsham. Its benefice is united with that of St Mary, Thornton-le-Moors.

A Norman chapel once stood on this site. The present church was built in the medieval period but only the tower and part of the chancel remain from this date. The chancel is in 14th-century Decorated style and possesses a three-light Decorated window in its east wall. The chancel has a 17th-century oak arch-braced collar roof. The Perpendicular tower by Simon Ripley dates from around 1485–93. The chancel roof, though restored, dates from 1671. The nave, aisle and porch were rebuilt in 1854 in Perpendicular style by Edward Hodkinson, and the tower was raised by two courses.

The church is built in red sandstone with a grey slate roof. Its plan consists of a west tower, a five-bay nave with a north aisle, and a chancel with a lower roof. 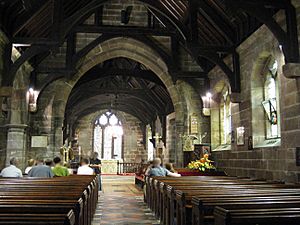 The sandstone 19th-century churchyard wall is a Grade II listed building. In the churchyard, north west of the tower, is the war grave of a Royal Navy sailor of World War II.

All content from Kiddle encyclopedia articles (including the article images and facts) can be freely used under Attribution-ShareAlike license, unless stated otherwise. Cite this article:
St James' Church, Ince Facts for Kids. Kiddle Encyclopedia.