The area was visited by farmers and trappers in the 18th century. The village was incorporated in 1870. By the early part of the 20th century Stamford reached its peak as a tourist area, mostly aided by the arrival of the Ulster and Delaware Railroad from Kingston in 1872. Passenger service lasted until March 31, 1954; freight service until September 28, 1976.

The Churchill Park Historic District and Erskine L. Seeley House are listed on the National Register of Historic Places.

There were 496 households, out of which 28.2% had children under the age of 18 living with them, 44.6% were married couples living together, 10.3% had a female householder with no husband present, and 41.5% were non-families. 34.5% of all households were made up of individuals, and 16.1% had someone living alone who was 65 years of age or older. The average household size was 2.28 and the average family size was 2.99. 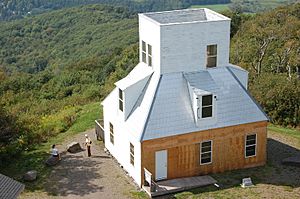 The village of Stamford is a stop on the Catskill Scenic Trail, a multi-use rail trail following the former route of the Ulster and Delaware Railroad. Catskill is also home of the Headwaters Trails. Overlooking Stamford on the east is 3,214-foot (980 m) Mount Utsayantha, which includes an observatory and a viewing tower. It is a popular destination for hang-gliding enthusiasts. 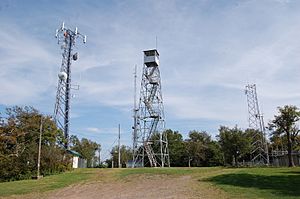 All content from Kiddle encyclopedia articles (including the article images and facts) can be freely used under Attribution-ShareAlike license, unless stated otherwise. Cite this article:
Stamford (village), New York Facts for Kids. Kiddle Encyclopedia.