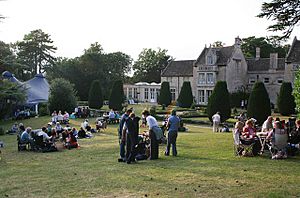 The grounds of Tolethorpe Hall; on the left the permanent canopy covering the auditorium

Stamford Shakespeare Company, a registered charity, is an amateur theatre company presenting an annual season of plays in June, July and August at the Rutland Open Air Theatre in the grounds of Tolethorpe Hall, Rutland.

The amateur Stamford Shakespeare Company was founded in 1968 by the late Jean Harley, then Artistic Director, with a performance of A Midsummer Night's Dream in the Monastery Garden of the historic George Hotel in Stamford, Lincolnshire. It was under the support of the Stamford Arts Centre Committee in aid of the proposed new Arts Centre and restoration of the town's Georgian Theatre. In 1971, the theatre group became independent and was named the "Stamford Shakespeare Company".

Open-air Shakespeare plays continued at the George Hotel until 1976, when the hotel could no longer accommodate the summer open-air theatre because of building work. Tolethorpe Hall came on the market in a near derelict state early in 1977 and was acquired by the Stamford Shakespeare Company with a private loan later repaid. The main interest in the grounds was a natural amphitheatre which was converted into a concrete-stepped 600-seat auditorium covered by a canvas canopy. The first season opened in May 1977 with performances of Macbeth and The Taming of the Shrew.

The hall itself stands on the middle of three terraces cut in sloping ground. The raked auditorium looks outward across the lower terrace which forms the stage behind which, is the open country of the Gwash valley. The Stamford Shakespeare Company presents a three-month season each summer. Normally there are two Shakespeare plays and one by another playwright.

All content from Kiddle encyclopedia articles (including the article images and facts) can be freely used under Attribution-ShareAlike license, unless stated otherwise. Cite this article:
Stamford Shakespeare Company Facts for Kids. Kiddle Encyclopedia.