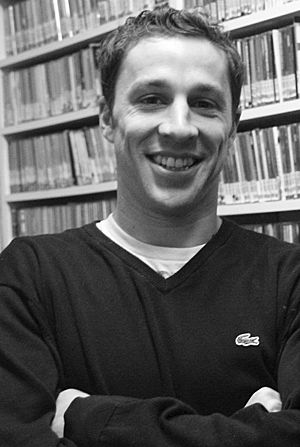 Steven Cherundolo (born February 19, 1979 in Rockford, Illinois) is an American soccer player. He has played most of career (until 2008) for the German football club Hannover 96. Cherundolo plays on the position of a defender.

Before he came to Hannover, Cherundolo played from 1997 to 1998 in an American college soccer league for the University of Portland.

In his first season for Hannover 96, 1998-99, he made four matches in the team which played in the 2nd German league (2. Bundesliga). In the following season, Cherundolo was in the team most of the time, but he had a bad knee injury. He came back during the 2000-01 season and made 18 matches. In the following season, he made 33 of 34 matches and has been a start member of the team most of the time until 2008.

In 2002 he got up to the 1st league with his club and played the following seasons in the 1st German league (1. Bundesliga). All together Cherundolo made 250 matches for Hannover 96 from 1999 to 2008, scoring six goals.

Cherundolo made his first match for the United States national team against Jamaica on 8th September 1999. Until 2008 he has made 44 matches for his national team, scoring two goals.

All content from Kiddle encyclopedia articles (including the article images and facts) can be freely used under Attribution-ShareAlike license, unless stated otherwise. Cite this article:
Steven Cherundolo Facts for Kids. Kiddle Encyclopedia.