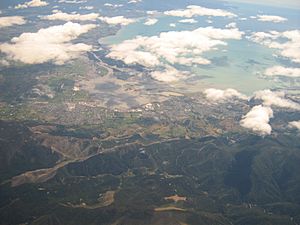 Stoke is slightly right of centre, lying between Richmond on the left and Tahunanui under the coastal cloud on the right

Stoke is a suburb of Nelson in New Zealand, located between Richmond and Tahunanui. In 2013 its population was 17,163. Stoke was named by William Songer, the personal servant of Arthur Wakefield, after his birthplace Stoke-by-Nayland in Suffolk. In 2010 it was voted the "Keep New Zealand Beautiful Peoples Choice Best Place in New Zealand".

A group of streets in Stoke have been named after famous literary figures. These streets lie between Main Road Stoke and Nayland Road, They include:

All content from Kiddle encyclopedia articles (including the article images and facts) can be freely used under Attribution-ShareAlike license, unless stated otherwise. Cite this article:
Stoke, New Zealand Facts for Kids. Kiddle Encyclopedia.