Stonehouse, Gloucestershire is a town and urban area within the Stroud District, in southwestern England.

It is home to a number of business and industrial parks which are home to the Severnside Dairy operated by Müller and other large companies including Schlumberger, Renishaw, Delphi Automotive, Lister Shearing and Dairy Partners. The town centre is 2.5 miles east of the M5 motorway. Stonehouse railway station has a regular train service to London.

The town is situated approximately 9 miles south of Gloucester city centre and 3.5 miles west of central Stroud, though following recent development it is partially contiguous with the Ebley district of Stroud. Stonehouse's population in 2016 was estimated at over 8,000 residents.

Stonehouse was mentioned in Willam the Conqueror's Domesday Book written in 1086. There was a manor house built in stone – quite different from the many wattle and daub buildings that were normally found. And so the area was named Stanhus in the book. The name evoluted from Stanhus to Stonehouse : stān > stone + hūs > house, as an effect of the great vowel shift at the end of the Middle Ages. 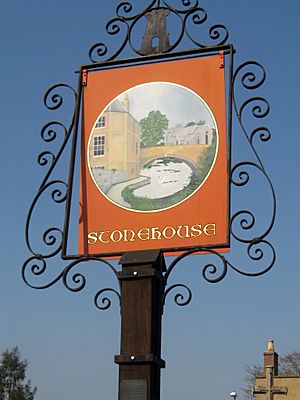 William De Ow, a cousin of William the Conqueror, owned the manor, whose grounds included two mills and a vineyard. In 1327, one of the manor's masters, John Maltravers, was found guilty of involvement in the murder of Edward II in Berkeley Castle, and fled abroad.

The manor house burned down in 1908. Today, on the same site stands Stonehouse Court Hotel, a Grade II listed manor house, which is now a hotel. It is located next to St Cyr's Church and the Stroudwater Canal. One of the original mills remains in operation.

Doverow Hill is a former quarry and there are many surrounding hills and a small cliff that looks out onto the whole of Stonehouse.

The stone which gave the town its name was replaced by red brick as the builder's material of choice . Due to the availability of raw materials in Stonehouse, brickmaking began there in 1856 with evidence of possible prior brickmaking as early as 1839 or 1840 and of as many as thirteen brickmaking sites altogether. The largest and last to close of the brickmakers, Stonehouse Brick and Tile Company Ltd., was located where the Rosedale housing estate now stands. It was founded in 1891, and by 1895 employed a large number of people in making pottery, terra-cotta, and bricks. The company closed in 1968 and the 202-foot high chimney was demolished. Bricks and other materials made by the company were not only used locally (notably in the Stonehouse police station and post office) and in other areas of Britain, but were also used as far away as Cape Town, Gibraltar, and Buenos Aires, with those used in Gibraltar transported there on the RMS Lusitania during her sea trials. 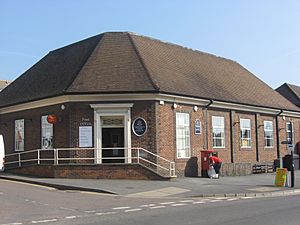 A community Centre is located near the Town's High Street, together with a festival of good shops, Post Office (in Supermarket), Town hall, butchers, banks, several food places and a building society. The town is well served by Doctors and Dentists alike.

One of the most well known establishments in the area is Wycliffe College. The school was founded in 1882 by G. W. Sibly and is for girls and boys aged 3–18 years old however it is now co-educational. One of the school's houses, Haywardsend, is one of the town's oldest buildings, an old Tudor farmhouse.

Other churches include Stonehouse Methodist. St Joseph's Catholic, a Baptist and the Bethel Church.

Stonehouse Live is a network of Christians bringing all the Churches together in Stonehouse.

An electoral ward with the same name exists. The area and population are identical to that of the parish.

Stonehouse had a Police Station until it was closed in late 2011.

The football club, Stonehouse Town F.C., has four teams, with the top one currently playing in the Northern Senior League.

There were thirty-three public houses and beer houses in Stonehouse in 1838; now there are only three. The Woolpack Inn is one of the oldest buildings in Stonehouse (17th century) and is certainly one of the oldest pubs in the town. It was the coaching hostelry for Stonehouse, and the coach from Bath stopped there. Further along the High Street is The Globe. The 18th-century Spa inn on Oldends Lane can also be considered one of Stonehouse's public houses. The pub started out selling its natural spring water in the 18th century before becoming a public house. But the wells have now been covered over. The Pub ceased trading in 2013 after a succession of landlords and was sold by Wadworths in 2014.

Bus services to Gloucester and Stroud are provided by Stagecoach, with other services to Cam, Dursley and the Stanleys.

Good road communication is provided, with the M5 situated with 2 miles of Stonehouse town centre, with the major industrial area located to the west of the town off the A419.

The town is served by Stonehouse railway station on the "Golden Valley Line", with a good and frequent service to London.

Stonehouse development was partly due to good communications for transport, In 1779, the Stroudwater Navigation, (now part of the Thames and Severn Canal) was cut and relics of the canal can still be seen. Ocean Bridge was an iron swing bridge where canal boats would turn. Once there was a repair yard here. Canal restoration is actively underway.

Business increased further when the land was prepared for the opening of the Midland Railway Station in 1844, and the Great Western Railway Station a year later. The Stonehouse and Nailsworth Railway opened a branch to Nailsworth in 1867 and Stroud in 1885.

When the threat of world war two became clear in the late 1930s, the Cotswolds were seen as a suitable location for the dispersement of aerospace shadow factories, being a safe place away from German bombers range. Smiths were co-located to Bishops Cleeve and Stonehouse was chosen as a good place to build factories for the manufacturers Sperry's Gyroscope Company, who moved to Bond's Mill and Hoffmann's Bearings located to Oldends Lane. These two factories employed many people during the war and for a long time afterwards ensuring employment in the town for many years.

On 12 September 1940, a lone Dornier flew along the Stroud Valley and photographed the area. Detailed mapping of the Sperry factory was noted by German Intelligence, in preparation for a raid in February 1943, although this never occurred.

Rationalisation of the railways happened quickly after the Second World War, with passenger services being suspended on the Stroud and Nailsworth branch in 1947, and to freight in the 1966. The Midland Railway Station was closed in 1965. Burdett Road Station, the last of two stations that Stonehouse possessed, was threatened with closure in 1972, but remains open to this day.

Stonehouse was connected to the national motorway network in 1971, when the M5 opened. In the late 20th century, Stonehouse saw substantial growth within industry; large multinationals such as ABB, International Intelligence Limited and Intelligent Armour Limited moving into the area.

Housing development in Stonehouse continued during the post war period, with the Park Estate being built in the 1950s, Little Australia, Boakes Drive and continuing into the 21st century, with the small developments at Arrowsmith Drive and Court View.

Stonehouse is very well situated for business and business growth due to its central UK location and close proximity to the motorway networks of the M5 & M4. Today Stonehouse has a large number of residential housing estates, including council housing and a small high street.

In 2011, Stonehouse High Street was made into a Community Shared Space, reopening in September 2011.

In 2016 a new eco-business park and wood-based football stadium for Forest Green Rovers was mooted by local businessman Dale Vince, CEO of Ecotricity, to be constructed west of the town, close to the M5 junction.

All content from Kiddle encyclopedia articles (including the article images and facts) can be freely used under Attribution-ShareAlike license, unless stated otherwise. Cite this article:
Stonehouse, Gloucestershire Facts for Kids. Kiddle Encyclopedia.