She began her career with singing and theatre. On the television series Perry Mason, she played Rowena Leach. She also acted in lots of movies. Her character was Opal Ann in the 1970 movie The Cheyenne Social Club. 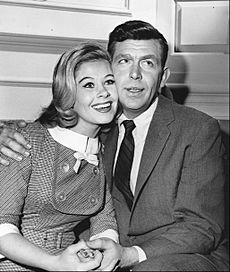 All content from Kiddle encyclopedia articles (including the article images and facts) can be freely used under Attribution-ShareAlike license, unless stated otherwise. Cite this article:
Sue Ane Langdon Facts for Kids. Kiddle Encyclopedia.