Sugar Notch Run is a tributary of Solomon Creek in Luzerne County, Pennsylvania, in the United States. It is approximately 3.0 miles (4.8 km) long and flows through Hanover Township, Sugar Notch, and Ashley. The watershed of the stream has an area of 2.33 square miles (6.0 km2). The stream is considered to be impaired by abandoned mine drainage for its entire length. However, brook trout and various macroinvertebrate taxa inhabit portions of the stream and it is designated as a Coldwater Fishery. Coal mining has historically been done in the watershed and a small intake dam was on the stream in the early 1900s. Recreational opportunities in the watershed include the Sugar Notch Trail System and Pennsylvania State Game Lands Number 207.

Sugar Notch Run begins on Wilkes-Barre Mountain in Hanover Township. It flows west-southwest for several tenths of a mile before turning north, passing through the valley of Sugar Notch and crossing Interstate 81. After several tenths of a mile, the stream briefly passes through the community of Sugar Notch before reentering Hanover Township and turns northeast. After a few tenths of a mile, it turns north-northeast, crossing Pennsylvania Route 29. The stream then turns north-northeast before turning north and entering the community of Ashley. In Ashley, it meanders north for some distance before reaching its confluence with Solomon Creek.

Sugar Notch Run is considered by the Pennsylvania Department of Environmental Protection to be impaired for its entire length. The source of the impairment is acid mine drainage and the cause of the impairment is flow alteration. The stream also has high levels of suspended solids and a low pH. The stream is also impaired by urban runoff and storm sewers. It experiences pollution including the dumping of trash and tires, as well as various other artificial blockages of the stream channel. It is also affected by woody debris and sedimentation, as well as undercut streambanks.

The discharge of Sugar Notch Run is 1.17 million gallons per day. The water temperature at five points on the stream has been measured as being between 62 and 70 °F (17 and 21 °C). The pH ranges from 4.5 to 7.0 at these sites, half of which have pHs of under 6 and two have pHs under 5. These two sites are the only places in the watershed of Solomon Creek that are too acidic to support aquatic life. The minimum concentration of dissolved oxygen in the stream is 0 milligrams per liter, which occurs at two sites. The maximum concentration is 9 milligrams per liter.

Sugar Notch Run loses some of its flow to subterranean mine pools. The cracks in its streambed can be up to 4 inches (10 cm) wide. In the stream's watershed, there are some cropfalls hundreds of feet deep lead into underground mine workings.

The valley of Sugar Notch is in the vicinity of Sugar Notch Run. Red shale, siltstone, and sandstone of the Mauch Chunk Formation occurs there. The Llewellyn Formation also occurs in the stream's watershed. Coal was historically mined in this formation.

The headwaters of Sugar Notch Run are in a forested area. However, the stream flows through abandoned mining lands for a substantial portion of its length. The stream is situated in the western and southwestern parts of the watershed of Solomon Creek.

The Hanover Township Youth Recreational Complex, the Preston Hose Company, and the Ashley Fire Hall are all in the watershed of Sugar Notch Run. The pump house that historically fed the Huber Breaker is also in the watershed. 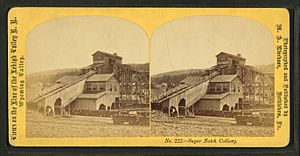 Coal mining has been done in the vicinity of Sugar Notch Run. The Lucky Strike Coal Company was found guilty of illegally discharging wastewater into Sugar Notch Run in November 1979.

Sugar Notch was listed as an impaired stream in 2004. Pollution along the stream was cleaned up by the Eastern Pennsylvania Coalition for Abandoned Mine Restoration in 2013.

A prestressed box beam bridge carrying State Route 2010 over Sugar Notch Run was constructed in 1961. It is 30.8 feet (9.4 m) long and is situated in Hanover Township.

The Sugar Notch Trail System is located in the watershed of Sugar Run. It consists of two trails: the Ridge Top Trail and the Park Access Trail. The former is 3.06 miles (4.92 km) long and the latter is 0.64 miles (1.03 km) long. The stream passes through the Greater Hanover Recreation Park. Pennsylvania State Game Lands Number 207 are in the watershed's upper reaches.

Sugar Notch Run is designated as a Coldwater Fishery. Brook trout are common in it both upstream and downstream of Interstate 81. The trout occur upstream of the Hanover Area Recreation Fields. The stream is designated for use by aquatic life.

Sugar Notch Run has a riparian buffer in its headwaters.

All content from Kiddle encyclopedia articles (including the article images and facts) can be freely used under Attribution-ShareAlike license, unless stated otherwise. Cite this article:
Sugar Notch Run Facts for Kids. Kiddle Encyclopedia.