Surfside Beach, also known locally as Surfside, is a city in Brazoria County, Texas, United States, that is situated on Follet's Island by the Gulf of Mexico near the city of Freeport. The population was 482 at the 2010 census. The city has claimed the "Cradle of Texas Liberty" title due to the fact that the Treaty of Velasco which ended hostilities between Texas and Mexico was signed at Fort Velasco, which was located near the city's current City Hall.

Surfside Beach is located in southern Brazoria County at 28°57′08″N 95°17′04″W﻿ / ﻿28.952136°N 95.284415°W﻿ / 28.952136; -95.284415. It is bordered to the southeast by the Gulf of Mexico and to the southwest by the entrance to Freeport Harbor, across which is the village of Quintana. The Intracoastal Waterway runs through the northwest part of the city, forming the northwest boundary in some places. The Bluewater Highway runs the length of Surfside Beach and continues northeast on Folletts Island 13 miles (21 km) to San Luis Pass and the bridge onto Galveston Island. Texas State Highway 332 begins in Surfside Beach and leads northwest past Freeport 12 miles (19 km) to Lake Jackson. 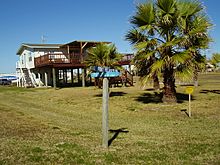 A Surfside Beach beach house and a street sign

Of the 259 households, 15.4% had children under the age of 18 living with them, 33.2% were headed by married couples living together, 7.3% had a female householder with no husband present, and 56.4% were not families. About 42.5% of all households were made up of individuals, and 10.8% were someone living alone who was 65 years of age or older. The average household size was 1.86, and the average family size was 2.50.

The city is served by Brazosport Independent School District (BISD).

The city is served by the Brazoria County Library System.

All content from Kiddle encyclopedia articles (including the article images and facts) can be freely used under Attribution-ShareAlike license, unless stated otherwise. Cite this article:
Surfside Beach, Texas Facts for Kids. Kiddle Encyclopedia.