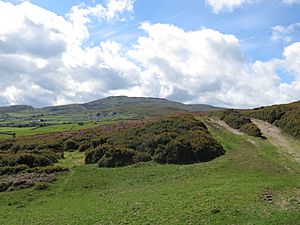 Tal y Fan is an outlying peak of the Carneddau mountains in North Wales. It is one of the four Marilyns that make up the Carneddau, the others being Carnedd Llywelyn, Pen Llithrig y Wrach and Creigiau Gleision.

It is 610 metres (2,001 ft) high, and lies midway between the Conwy valley to the east and Penmaenmawr on the coast to the north-west. It is the most northerly 2000 ft summit in Wales.

On 6 May 2013 BBC News reported that a precise GPS measurement of Tal y Fan's height had been verified by the Ordnance Survey as 609.98 metres or 2,001 feet, confirming its status as a mountain. Bwlch y Ddeufaen separates Tal y Fan from the main Carneddau ridge, the closest summit on which is Carnedd y Ddelw. Pen y Castell is directly opposite to the south.

All content from Kiddle encyclopedia articles (including the article images and facts) can be freely used under Attribution-ShareAlike license, unless stated otherwise. Cite this article:
Tal y Fan Facts for Kids. Kiddle Encyclopedia.