Tasker Howard Bliss was born in Lewisburg, Pennsylvania, to George Ripley Bliss and Mary Ann (née Raymond) Bliss. He attended Bucknell (then Lewisburg) University for one year. He was a member of Phi Kappa Psi Fraternity before entering the United States Military Academy (USMA) at West Point, New York. At the USMA, he excelled in languages, mathematics, and tactics and graduated eighth in his class on 16 June 1875.

Upon graduation, Bliss was commissioned a second lieutenant in the 1st Artillery and performed routine garrison duties in Georgia and New York. On 14 September 1876, he was appointed to the USMA as an Assistant Professor of French until 1882. While assigned to the USMA, he was promoted to first lieutenant.

Bliss married Eleanor (or Eleanora) E. Anderson on 24 May 1882. In late 1882, he was assigned to Fort Mason, California, and Fort Monroe, Virginia. Their first child, Eleanora, was born in January 1884. In 1885, he was an instructor at the Naval War College where he was sent to England, Germany, and France to study their military schools. The purpose of the trip was to determine if United States military schools were teaching similar and relevant material. He returned to the United States and on 16 May 1888, he was assigned to be aide-de-camp to U.S. Army Commanding General John M. Schofield. A concurrent assignment while aide-de-camp was Inspector of Artillery and Small Arms. During this time, the Blisses' son Edward Goring was born in June 1892.

On 20 December 1892, while aide-de-camp, he was promoted to Captain, Staff, Commissary of Subsistence and on 26 September 1895 he was assigned to special duty at the office of the Secretary of War. On 4 March 1897, he was assigned as the Quartermaster and Commissary at Fort Monroe, Virginia. On 2 July 1897, he was sent to Spain as the military attaché to the United States Legation. When war was declared between Spain and the United States, Captain Bliss was ordered to return to the U.S., via Paris, on 21 April 1898.

On 30 April 1898, Bliss was promoted to major, Staff, Commissary of Subsistence and on 9 May to lieutenant colonel and Chief, Commissary of Subsistence, U.S. Volunteers. Bliss was then assigned to the 6th Army Corps as Chief Commissary, 23 May 1898, and then Camp George H. Thomas, in Chickamauga, Georgia, until ordered to Santiago, Cuba, and then Puerto Rico on 20 July 1898. Colonel Bliss arrived in Ponce, Puerto Rico, in early August and was appointed as the Chief of Staff, 1st Division, I Army Corps, under Major General James H. Wilson. Concurrent assignments included being a board member to select camp sites in Cuba and chief commissary of the I Army Corps.

In 1900, Bliss was elected as a veteran companion of the Pennsylvania Commandery of the Military Order of Foreign Wars.

Bliss was commissioned as a brigadier general in the Regular Army by an Act of Congress under direction of the U.S. President Theodore Roosevelt. On 15 August 1903, Bliss was appointed a member of the General Staff, Chief, 3rd Division and President of the Army War College. In September 1904, he participated in the Manassas maneuvers in Virginia.

On 7 June 1905, Bliss was ordered the Philippine Islands to command the Department of Luzon. On 9 January 1906, he was assigned as commander of the Department of Mindanao and appointed governor of the Moro Province. While still governor of the Moro Province, Bliss was ordered to command the Philippine Division on 14 December 1908. He relinquished all Philippine Islands commands on 6 April 1909, and returned to the U.S. after touring China and Manchuria. 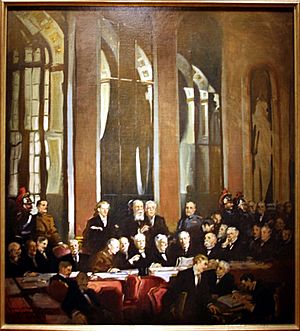 On 13 February 1915, Bliss was detailed to the general staff as Assistant Chief of Staff, Army until his promotion to Chief of Staff on 22 September 1917. He was promoted to major general in the Regular Army on 20 November 1915 and received a temporary promotion to full general (four star) in the National Army on 6 October 1917. On 17 November 1917, he was assigned as the American Permanent Military Representative, Supreme War Council, concurrent with the U.S. Army Chief of Staff position.

Bliss was forced to retire due to age limitations on 31 December 1917, but by order of President Woodrow Wilson, was recalled to active duty on 1 January 1918 and sent to Versailles, France, on 23 January to better carry out his duties on the Supreme War Council. He was relieved as U.S. Army Chief of Staff on 19 May 1918, and returned to his permanent rank of major general (retired) 20 May 1918. After the signing of the armistice ending World War I, on 11 November 1918, Bliss held two titles, the American Permanent Military Representative, Supreme War Council, and also, Plenipotentiary at the Paris Peace Conference. This assignment was concluded on 10 December 1919.

He died on 9 November 1930. He is buried in Arlington National Cemetery, Washington, DC.

Edward Goring Bliss was the son of Tasker and Eleanor E. Bliss. Born on 2 June 1892, he graduated from the USMA in 1916 and was commissioned a 2nd Lieutenant in the Engineer Corps. He saw service in Siberia in 1918–1919 and through World War II. He retired with the rank of lieutenant colonel.

His daughter Eleanora, born in 1885, attended Bryn Mawr College where she became the first women to gain a doctorate in geology. She joined the United States Geological Survey where she met and married fellow geologist, Adolph Knopf.

A portrait of General Bliss hangs in Luce Hall at the United States Naval War College.

Contrary to popular belief, Fort Bliss, Texas is not named after him. Fort Bliss is named for Lieutenant Colonel William Wallace Smith Bliss, a veteran of the Mexican War.

Bliss never held the rank of colonel. He was promoted to brigadier general from major by an act of Congress at the President's request.

Bliss also never held the rank of lieutenant general. He was appointed a general by the U.S. President under U.S. Code, Title 10, Subtitle A, Part I, Chapter 6, § 164, which provided for the Chief of Staff of the Army to serve with the rank of general.

All content from Kiddle encyclopedia articles (including the article images and facts) can be freely used under Attribution-ShareAlike license, unless stated otherwise. Cite this article:
Tasker H. Bliss Facts for Kids. Kiddle Encyclopedia.