Temple of Zeus at Olympia facts for kids 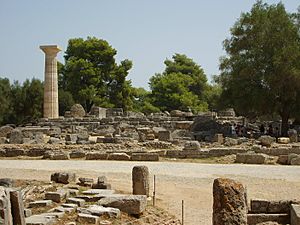 Temple of Zeus in ruins

The Temple of Zeus is a Doric temple in the sanctuary at Olympia, Greece. Olympia was the site of the ancient Olympic Games. The temple is a ruin. It was dedicated to Zeus, the principal god of the Ancient Greeks. This temple was the most important and most impressive structure at Olympia.

The temple was built between 470 BC and 456 BC. Local limestone was the chief material used. The roof tiles, the gargoyles, and the sculptures were made of marble. The temple measured 64.12 meters by 27.66 meters. It was 20.25 meters high. The temple had six columns at the ends and thirteen columns along both sides. The height of each column was 10.45 meters.

A ramp at the eastern end led to the prodomos. The table holding the Olympic wreaths stood to the right. The crowning of the victors took place on the last day at this spot.

Statue bases cover the area around the temple. These bases held statues of gods, heroes, and Olympic victors. They were dedicated by individuals and cities. The sacred olive from which the Olympic wreaths were cut stood on the west side of the temple. Emperor Theodosius II ordered the temple burned to the ground in 426 AD. Earthquakes destroyed it in 522 AD and in 551.

All content from Kiddle encyclopedia articles (including the article images and facts) can be freely used under Attribution-ShareAlike license, unless stated otherwise. Cite this article:
Temple of Zeus at Olympia Facts for Kids. Kiddle Encyclopedia.