The 7th Voyage of Sinbad facts for kids

It was the first of three Sinbad feature films from Columbia, the later two from the 1970s being The Golden Voyage of Sinbad (1973) and Sinbad and the Eye of the Tiger (1977). All three Sinbad films were conceptualized by Ray Harryhausen using Dynamation, the full color widescreen stop-motion animation technique that he created.

While similarly named, the film does not follow the storyline of the tale "The Seventh Voyage of Sinbad the Sailor" but instead has more in common with the Third and Fifth voyages of Sinbad.

The 7th Voyage of Sinbad was selected in 2008 for preservation in the United States National Film Registry by the Library of Congress as being "culturally, historically, or aesthetically significant".

Sinbad the Sailor and his ship's crew make landfall on the island of Colossa, where they encounter Sokurah the magician fleeing a giant cyclops. Though he escapes, Sokurah loses a magic lamp to the creature. Sinbad refuses his desperate pleas to return to Colossa because Parisa, Princess of Chandra, is aboard. Their coming marriage is meant to secure peace between her father's realm and Sinbad's homeland, Baghdad. 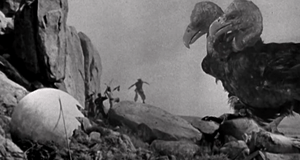 Sinbad and his men confront the Roc.

After reaching Baghdad, Sokurah performs magic at the pre-wedding festivities, temporarily turning Parisa's handmaiden into a snake-like being. Despite his prowess and a dark prophecy about war between Baghdad and Chandra, the Caliph of Baghdad refuses to help the magician return to Colossa. Later that night, Sokurah secretly shrinks the princess, enraging her father, the Sultan of Chandra, who declares war on Baghdad. Sinbad and the Caliph give in to Sokurah, who explains that the eggshell of a Roc is needed for the potion that will restore Parisa, and it can be found only on Colossa. Sokurah provides Sinbad with the plans for a giant crossbow for protection against the island's giant creatures.

Sinbad recruits additional crewmen, from among the convicts in the Caliph's prisons. Before they reach Colossa, the cutthroats are inspired to mutiny by the treacherous Karim and capture Sokurah, Sinbad, and his men. During a violent storm, the sounds of keening demons from a nearby island drives the crew nearly mad, endangering the ship. One of the men releases Sinbad so he can save them, after Karim falls to his death from the crow's nest.

On Colossa, Sinbad, Sokurah, and six of his crew enter the valley of the cyclops, followed by Sinbad's loyal aide Harufa. Sinbad and Sokurah split their forces. Sinbad and his men find the cyclops' treasure cave, but are captured by one of the creatures and locked in a wooden cage. Sokurah, in the meantime, retrieves the magic lamp, but is chased by the cyclops, who kills three of the men. With Parisa's aid, Sinbad manages to escape, then blinds the one-eyed creature and lures it off the edge of a cliff to its death. Sinbad decides to hold on to the lamp until Parisa is returned to normal size.

Sokurah leads Sinbad and his starving men to the nesting place of the giant Rocs. Out of hunger, Sinbad's men try to break open a Roc egg, causing it to hatch, but the newborn chick is killed by the men and fire-roasted for food. While the men are eating, Parisa enters the magic lamp and befriends Barani, the childlike Genie inside, who tells her how to summon him in exchange for her promise of his freedom. The parent Roc returns and slays the men. Sinbad tries to summon the genie, but he is grabbed by the Roc, who takes flight, and drops him, unconscious, into its nearby nest. Sokurah kills Harufa and abducts the princess, taking her to his underground fortress.

Sinbad awakens and rubs the magic lamp, summoning Barani, who takes Sinbad to Sokurah's fortress and helps him evade the chained dragon that stands guard. Sinbad reaches Sokurah, who restores the princess to normal. When Sinbad refuses to hand over the lamp, the magician animates a skeleton warrior, which Sinbad sword-fights and destroys. With the help of the genie, Sinbad and Parisa make their way out of the cave, stopping to destroy the lamp by throwing it into a pool of lava, thus freeing Barani.

Leaving the cave, they encounter another cyclops. Sinbad releases the dragon, which fights and kills the creature. Sinbad and Parisa make their escape, but Sokurah orders the dragon to hunt them down. Sinbad heads to the beach, where his men have readied the giant crossbow, and they use it to kill the dragon. The dying dragon collapses on Sokurah, crushing him to death. Sinbad, Parisa, and the remaining crew depart for Baghdad. They are joined by Barani, now human, who has appointed himself as Sinbad's cabin boy. In a final act of magic as he was being freed, Barani filled the captain's cabin with the treasure from the cyclops' cave, a wedding gift to Sinbad and Parisa.

The music score for The 7th Voyage of Sinbad was composed by Bernard Herrmann, better known at the time for his collaboration with the director Alfred Hitchcock. Herrmann went on to write the scores for three other Harryhausen films: Mysterious Island, The 3 Worlds of Gulliver, and Jason and the Argonauts. Of the four, Harryhausen regarded the score for The 7th Voyage of Sinbad as being the finest, due to the empathy Herrmann's main title composition evoked for the subject matter.

The soundtrack producer Robert Townson, who re-recorded the score in 1998 with the Royal Scottish National Orchestra, described the music as rich and vibrant, commenting "I would cite The 7th Voyage of Sinbad as one of the scores which most validates film music as an art form and a forum where a great composer can write a great piece of music. As pure composition, I would place Sinbad beside anything else written this century and not worry about it being able to stand on its own".

All content from Kiddle encyclopedia articles (including the article images and facts) can be freely used under Attribution-ShareAlike license, unless stated otherwise. Cite this article:
The 7th Voyage of Sinbad Facts for Kids. Kiddle Encyclopedia.