The Cenotaph, Southampton facts for kids

The Southampton Cenotaph is a stone memorial at Watts Park in Southampton, England, originally dedicated to the casualties of the First World War. The memorial was designed by Edwin Lutyens and features a cenotaph on a plinth atop a gently curved pillar. The monument was intended to be abstract and graceful, encouraging a perception of the soldier having fallen in a peaceful, "beautiful death". Decisions over which names should be engraved on the Southampton Cenotaph proved controversial in the 20th century, but the design was heavily influential in determining the form of Lutyens' more famous Cenotaph in Whitehall. Long-term weather damage to the memorial led to a glass wall being built alongside it in 2011, incorporating the names of those Southampton citizens who died in subsequent conflicts.

The First World War between 1914 and 1918 caused casualties on a massive scale. Shortly after the signing of the Armistice in November 1918, a public meeting was held in the city of Southampton which voted to construct a memorial "to those who have fallen in the Great War". A committee, headed by the Lord Mayor of Southampton, Sidney Kimber, was elected and discussions began as to what form such a memorial should take. The committee decided that their preferred option would be to construct a single, high-quality memorial in a good location within Southampton and began to consider architects and locations, with a proposed budget of £10,000. Alfred Gutteridge, an architect on one of the sub-committees, knew and recommended the architect Edwin Lutyens; at this time Lutyens had been involved in the design of several war cemeteries but only one war memorial, which he had designed for South Africa.

Elements of the committee met with Lutyens in January 1919 to discuss options for the memorial. Lutyens argued against the committee's initial proposed location on Asylum Green in favour of Watts Park, which the committee agreed to. Lutyen's initial design consisted of a large ceremonial pillar with a substantial archway on either side, each archway supporting a soldier lying on a sarcophagus. This was rejected due to the likely cost and instead Lutyen suggested a single empty sarcophagus or cenotaph, supported by a plinth on top of a pillar, with pine cones mounted on urns standing on each side. This was agreed to at a public meeting in September and detailed work on the project began. The London firm of Holloway Brothers were selected as the contractor for the memorial; the project was completed to time at a total cost of £9,845.

The Cenotaph was opened by General John Seely at a public ceremony on 6 November 1920 that included the playing of the Last Post and a two-minute silence. Kimber was very pleased with both the project and Lutyens, and he hoped to build a second war memorial in Southampton using the architect, although this project never came to fruition. The Southampton Cenotaph was influential in later designs for war memorials both in England and abroad; it was the first such cenotaph to be built and simpler versions of the same design were widely used to commemorate the First World War, including famously at the Cenotaph in Whitehall, London.

Issues arose after the erection of the memorial concerning the names inscribed on the Cenotaph. The committee had identified 1,793 names of Southampton men, and a number of women, who had died during the war and these had been inscribed on the Cenotaph. After the unveiling of the monument various relatives approached the committee requesting that additional names be added; after a newspaper campaign in the Southern Daily Echo newspaper, Kimber agreed to this and 203 additional names were inscribed in 1921. Another name was added in 1922, bringing the total to 1,997. More controversy surrounded the exclusion of the Jewish war dead from the memorial. Jews in Southampton had donated to the committee on the understanding that the memorial would commemorate not only Christian casualties but Jewish ones as well: one in ten adult male Jews in Southampton died during the conflict, twice the proportion for Southampton as a whole. Following the final decision on the design of the Cenotaph, however, which featured a prominent Christian cross, Jewish names were predominantly excluded from the memorial and only one Jewish name was finally inscribed on it.

By the start of the 21st century it became evident that the soft stone of the Cenotaph was deteriorating badly as a result of water damage and frost. Recutting the names on the monument was discounted as a solution due to the long term damage this repeated work would cause to the Cenotaph's structure: the decision was made to expand the war memorial instead. A glass wall consisting of eight large panels 2.85 m (9 ft) by 1.2 m (4 ft) in size, was built alongside the Cenotaph at a cost of £130,000. The panels were engraved with the names of the World War I casualties and, in addition, those from Southampton who had died in later conflicts. The Memorial Wall included a total of 2,368 names from the First World War, 927 from the Second World War and three from subsequent conflicts. This addition to the Cenotaph was opened on 11 December 2011. 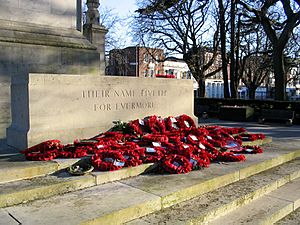 Part of the engravings on the Cenotaph

Lutyens' final design for the Southampton Cenotaph reused elements of his previous work. The central pillar on which the plinth supporting the sarcophagus rests is a variant of the War Stone intended for the War Shrine in Hyde Park, which Lutyens designed in 1918 but which was never taken forward. The pillar is in fact slightly curved in imitation of the pillars at the Parthenon in Athens, and a similar effect is later repeated by Lutyens at the Whitehall Cenotaph. The urns on either side of the Cenotaph are drawn from Lutyens' design for the military cemetery at Étaples, where the same design is used, but without the additional pine cones. Unlike Lutyens' later work, the Southampton memorial is relatively heavily carved, including a large cross, the Southampton city crest, the arms of the different Armed Services, two lions and a sword, as well as the dedication to "Our Glorious Dead: Their Name Liveth For Evermore". The thin sheets of white Portland stone on the outside of the monument hide an inner brick core.

Lutyens' design predominantly draws on a cleaner, more streamlined version of the classical symbolism used in earlier monuments. Earlier monuments of the Second Boer War typically included figures of soldiers, sometimes falling in conflict, but always passing away heroically in a "beautiful death" with classical symbolism often used to distance the event of death from the observer, as typified in William Colton's work at Worcester. Lutyens' work at Southampton reacted to the criticism of this sometimes cluttered approach by adopting cleaner architectural forms, but still retaining the ideal of a peaceful, "beautiful death". The Southampton Cenotaph makes use of an abstract, beautiful design intended to remove the viewer from the real world, and focus them on an idealised sense of self-sacrifice and death.

All content from Kiddle encyclopedia articles (including the article images and facts) can be freely used under Attribution-ShareAlike license, unless stated otherwise. Cite this article:
The Cenotaph, Southampton Facts for Kids. Kiddle Encyclopedia.