The Esplanade, Weymouth facts for kids 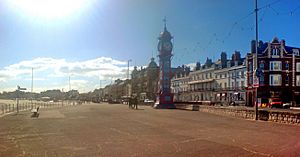 View of the Esplanade, including the Victorian Jubilee Clock. 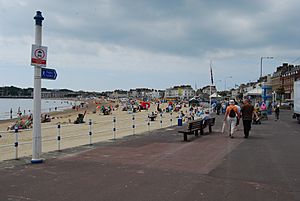 View of Weymouth Beach from the Esplanade. 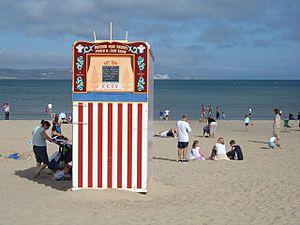 Punch and Judy on the beach viewed from the Esplanade. 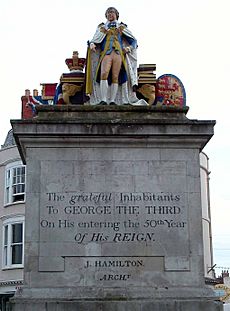 Statue of King George III on the Esplanade - "King's Statue".

The Esplanade is a wide walkway and street on the seafront at Weymouth, Dorset on the south coast of England.

The Esplanade is immediately next to the sandy Weymouth Beach. To the south at the end of the Esplanade are Weymouth Pier,the Condor Ferries terminal for ferry service to the Channel Islands and the Pavilion Theatre. Also towards the south is King's Statue - a statue of King George III who visited Weymouth and helped to make sea bathing fashionable here. The inscription reads:

To GEORGE THE THIRD
On His entering the 50th Year
Of His REIGN.

The Jubilee Clock is a brightly painted and very visible feature on the Esplanade. It was erected in 1887 to mark the Golden jubilee of Queen Victoria. To the north is the Queen Victoria Statue, St John's Church and the suburb of Greenhill.

There are a number of tourist-oriented shops on the Esplanade, together with many guest houses, hotels, and places to eat. These include the long-established Rossi's Ices, which started trading in 1937.

All content from Kiddle encyclopedia articles (including the article images and facts) can be freely used under Attribution-ShareAlike license, unless stated otherwise. Cite this article:
The Esplanade, Weymouth Facts for Kids. Kiddle Encyclopedia.