The Pirates! In an Adventure with Scientists! facts for kids

Kids Encyclopedia Facts
This page is about the 2012 film. For the book on which the film is based, see The Pirates! In an Adventure with Scientists.

The Pirates! In an Adventure with Scientists! (released in North America, Australia and New Zealand as The Pirates! Band of Misfits) is a 2012 British-American 3D stop motion animated swashbuckler comedy film produced by the British studio Aardman Animations and the American studio Sony Pictures Animation as their second and final collaborative project. Directed by Peter Lord, the film is based on the 2004 novel The Pirates! In an Adventure with Scientists, the first book from Gideon Defoe's The Pirates! series. It follows a crew of amateur pirates in their attempt to win the Pirate of the Year competition.

The film was distributed by Columbia Pictures and was released on 28 March 2012 in the United Kingdom, and on 27 April 2012 in the United States. The Pirates! features the voices of Hugh Grant, Martin Freeman, Imelda Staunton, David Tennant, Jeremy Piven, Salma Hayek, Lenny Henry and Brian Blessed. The Pirates! is the fifth feature film by Aardman Animations, and its first stop motion animated feature since Wallace & Gromit: The Curse of the Were-Rabbit in 2005, and Aardman's first stop motion animated film released in 3D and shot in 2.35:1 widescreen. The film received generally positive reviews, and was a modest box office success, earning $123 million against a budget as high as $55 million. The film was nominated for the 2013 Academy Award for Best Animated Feature, but lost to Pixar's Brave.

In 1837, Queen Victoria is told that England rules the entire ocean, with the exception of the pirates, whom she despises.

Meanwhile, the Pirate Captain (Andrew Arrmandinger), inexpert in the ways of pirates, leads a close-knit, rag-tag group of amateur pirates who are trying to make a name for themselves on the high seas. To prove himself and his crew, Arrmandinger enters the Pirate of the Year competition, the winner being whoever can plunder the most. After several failed attempts to plunder mundane ships, they come across the Beagle and capture its passenger Charles Darwin. Darwin recognizes the crew's pet "parrot", Polly, as the last living dodo, and recommends they enter her in the Scientist of the Year competition at the Royal Society of London for a valuable prize. Secretly, Darwin plans on stealing Polly himself with the help of his trained chimpanzee, Mr. Bobo, as to impress his love interest Queen Victoria.

The pirates disguise themselves as scientists to enter the competition, and the dodo display wins the top prize, which turns out to be minuscule trinkets and a meeting with the Queen. The Pirate Captain hides Polly before the meeting. There, the Queen requests that the Pirate Captain donate Polly for her petting zoo. The Pirate Captain refuses and accidentally reveals his true identity. The Queen, who hates pirates with a passion, orders him executed, but Darwin steps in to spare the Captain's life, secretly telling the Queen that only the Captain knows where Polly is kept. The Queen pardons the Pirate Captain and orders Darwin to find Polly by any means necessary. Darwin takes the Pirate Captain to a tavern and coaxes out of him that Polly is stashed in his beard. Darwin and Mr. Bobo steal the bird, leading to a chase into the Tower of London where the Queen is waiting. She dismisses Darwin and instead offers the Pirate Captain enough money to ensure his win as Pirate of the Year in exchange for Polly. He accepts the offer and returns to his crew, assuring them Polly is still safe in his beard.

At the Pirate of the Year ceremony, the Pirate Captain wins the grand prize from the Pirate King. But rival pirate Black Bellamy makes the Queen's pardon known to all and explains that if the Pirate Captain has been pardoned, then he is no longer a pirate and, as such, cannot be Pirate of the Year. The Captain is stripped of the prize, treasure, pirate attire, and his pirating license and is banished from Blood Island by the Pirate King, and admits his loss of Polly to his crew, who abandon him. The Captain returns to London, intent on rescuing Polly. He reunites with Darwin, learning that the Queen is a member of an exclusive society of world leaders that feast on endangered creatures, and that Polly is likely on her flagship, the QV1, to be served at the next meal. The Pirate Captain and Darwin work together to steal an airship to travel to the QV1. Mr. Bobo, meanwhile, goes to find the rest of the Captain's crew to enlist their help.

Aboard the QV1, the Queen locates the Pirate Captain and Darwin and attempts to kill both of them, but Captain's Number 2, Mr. Bobo, and the crew come to their aid and together they beat her. In the battle, they accidentally mix the ship's store of baking soda with vinegar, causing a violent reaction that rends the ship in two after the pirates reconcile. The Pirate Captain rescues Polly and they escape safely, leaving behind a furious Queen. With his reputation among pirates restored because of the large bounty now on his head, 100,000 doubloons, which is the highest in the history of piracy, the Pirate Captain is reinstated as a pirate, and he and his crew continue to explore the high seas in search of adventure. 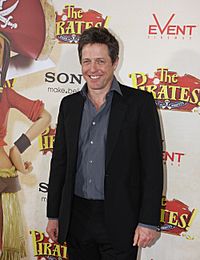 Hugh Grant in April 2012 at the film's premiere in Sydney, Australia

By August 2011, Aardman had been already working on a sequel idea, and by June 2012, a story had been prepared, awaiting Sony to back the project. Eventually, Sony decided not to support the project due to insufficient international earnings. According to Lord, "it got close, but not quite close enough. I was all fired up for doing more. It was such fun to do! We actually have a poster for The Pirates! In an Adventure with Cowboys!. That would have been just great."

All content from Kiddle encyclopedia articles (including the article images and facts) can be freely used under Attribution-ShareAlike license, unless stated otherwise. Cite this article:
The Pirates! In an Adventure with Scientists! Facts for Kids. Kiddle Encyclopedia.