The son of William Blessed, a socialist miner, and Hilda Wall, Blessed was born at the Montague Hospital in the town of Mexborough, Yorkshire. He attended Bolton on Dearne Secondary Modern School, but after his father suffered an industrial accident, he was forced to leave school early at 14 and spent several years working at a variety of jobs, ranging from undertaker to plasterer's assistant. He completed his National Service as a parachutist in the Royal Air Force. He began his acting training at the Bristol Old Vic Theatre School, alongside Patrick Stewart. He has written about his early life in his autobiography, Dynamite Kid (1992).

An early role was that of PC "Fancy" Smith in the BBC police drama Z-Cars from 1962 to 1965. In 1966, Blessed appeared in Incident at Vichy at the Phoenix Theatre in London. Blessed had small roles in such cult shows as The Avengers (1967, 1969) and the original Randall and Hopkirk (Deceased) (1969). He portrayed Caesar Augustus in the BBC series I, Claudius. He portrayed Basileos in the BBC mini-series Michael J. Bird's The Aphrodite Inheritance (1979). He portrayed the father of Robin Hood, Lord Locksley, in the blockbuster Robin Hood: Prince of Thieves (1991).

He has appeared in a number of Shakespearean roles on both stage and screen, including four of the five Shakespeare films directed by Kenneth Branagh: as The Duke of Exeter in Henry V (1989), Antonio in Much Ado About Nothing (1993), The Ghost of Hamlet's Father in Hamlet (1996), and the dual role of Duke Frederick and Duke Senior in As You Like It (2006). He also provided the voices of Bob in the animated series Kika & Bob (2008) and Grampy Rabbit in Peppa Pig.

He also hosted the 1978 documentary on the life of Johann Sebastian Bach called the "The Joy of Bach" in which he also portrayed Bach in different vignettes in this documentary.

Other roles have emphasised his comedic abilities: notably Prince Vultan in Flash Gordon (1980) – for which he is frequently remembered for the famous line "Gordon's alive!"; the mad, comic figure of Richard IV in the first series of The Black Adder (1983); and Spiro in the BBC adaptation of My Family and Other Animals (1987). He also played the role of General Yevlenko in the miniseries War and Remembrance (1988). Blessed jokes he almost starred in Blackadder II (1986) as Queen Elizabeth but he wasn't available at the time of filming.

He provided the vocal links on the Sony-Award-winning Christian O'Connell Breakfast Show on Virgin Radio and introduced adverts for Orange mobile phones. At Christmas 2006, he presented a panto Cinderella for Virgin Radio starring actors such as David Tennant and Thandie Newton. In November 2006, Blessed made a surprise appearance on the midday talk show Loose Women. Also, he is featured reading the story "The White City, Part 1" which is the final piece on the album Late Night Tales: Nightmares on Wax. Blessed was also the voice of Jean Valjean in Focus on the Family Radio Theatre's audio dramatic adaptation of Victor Hugo's Les Misérables.

Blessed has also starred in Andrew Lloyd Webber's Cats as both Old Deuteronomy and Bustopher Jones during the original West End theatre production. In 2002, under the direction of Royal Shakespeare Company director Adrian Noble, Blessed originated the role of Baron Bomburst for the stage musical version of Chitty Chitty Bang Bang.

During December 2005 to January 2006, Blessed headlined the pantomime production of Peter Pan, alongside CBBC Television presenter Kirsten O'Brien at the Regent Theatre in Ipswich. In late 2007 and early 2008, Blessed starred in the panto version of Peter Pan as Captain Hook at the Grove Theatre in Dunstable. He played the same role again in "Peter Pan" in late 2007, early 2008 and again at Christmas 2008 at the Fairfield Halls, Croydon.

Since October 2008, Blessed presents the UK showings of the Japanese gameshow Unbeatable Banzuke on the Challenge channel under the name Banzuke Brian. He also guest hosted episodes of Have I Got News for You in May 2008 and April 2013.

In 2009, Blessed played the world's worst explorer, Sir Basil Champion – a character based upon Blessed's fictional inspiration, The Lost World's Professor Challenger – in the fourth story in The Scarifyers series, The Curse of the Black Comet. The story was broadcast on BBC7 in 2010.

In November 2009, Blessed starred in a series of online videos on the BBC Comedy website in which he played Henry VIII. The concept of the video series is that the Tudor king is alive & well, and living in a suburban semi with his long-suffering sixth wife Catherine Parr. Henry has embraced modern technology and lives his life online – insulting the King of France on Facebook, surfing for desirable women friends, and blocking the Pope on Twitter.

In late 2009, Blessed starred as the Narrator in the In the Wings production of Peter and the Wolf at the New Victory Theater, New York.

After a successful campaign on social networking site Facebook, satnav manufacturer TomTom recorded Brian Blessed's voice as an option for those using its satnav devices; Blessed's voice has been available in devices since October 2010.

In September 2010, Blessed recorded the voiceover to Sheherazade, or The Princess, the Pirate and the Baboon!, an album of children's stories set to the classical music composition Scheherazade by Nikolai Rimsky-Korsakov and also featuring the voices of Rory Bremner, Jess Murphy, Sam Morris and Nigel Garton. Brian voiced the role of the Great Sultan Shahryār; the album was released as the first in a series entitled Grandma Dingley's Ingeniously Musical Tales in March 2011.

In 2013, Blessed starred in an advertising campaign for the New Zealand bank ASB playing a fictionalised version of himself encouraging the humble population to be proud of their achievements whether big or small.

Blessed has attempted to climb Mount Everest three times, getting to 28,200 feet in 1993 and 25,200 feet in 1996, but never reaching the summit. He has reached the summit of Aconcagua, in Argentina, and Kilimanjaro, in Tanzania. He is the oldest man to trek on foot to the magnetic North Pole, and has undertaken an expedition deep into the jungles of Venezuela.

Blessed has an honorary position as official Shoutsperson of the University of York's Douglas Adams Society, and in 2011 the University's student body voted to name a new study space as the 'Brian Blessed Centre for Quiet Study'.

In 2004, Blessed sang on Celebrity Stars in Their Eyes, impersonating Luciano Pavarotti. He is known for his football knowledge and appeared as an expert on the British satellite station UKTV G2 during the 2006 World Cup. He also appeared on A Question of Sport in 2006 and again in 2011 and was a guest host of Have I Got News for You in May 2008, alongside guests Alan Duncan and Marcus Brigstocke (also making a surprise appearance in the Christmas special later in the year). His madcap manner quickly made the show deviate from its usual format, with Paul Merton remarking "Does anyone remember how this show used to be like?" In the same month he appeared as a guest on The Paul O'Grady Show.

Blessed was President of the Television and Radio Industries Club (TRIC) in 2007–2008 and presented the 2008 TRIC Awards at the Grosvenor House, Park Lane. TRIC is an organisation which honours achievers in the film and radio industries. He has honorary degrees from the University of Bradford, awarded in July 2003, and Sheffield Hallam University, awarded in 2004.

He also stars in the Living Legend show in Jersey, Channel Islands. It features many celebrity faces, such as Roger Lloyd Pack, Samantha Janus, Kevin Whately and Tony Robinson. The story is of the history of the island.

In 2009, he featured on the song "Army of the Damned", part of the debut album Beneath the Veiled Embrace by UK power-metal band Pythia, reading the poem "Suicide in the Trenches" by Siegfried Sassoon. He also contributed to "The Joust" by Eden Burning in 1994.

In June 2011, a campaign by Cambridge graduates resulted in Blessed's being nominated for the post of Chancellor of the University of Cambridge.

In February 2013, a piece of DLC for the PC game War of the Roses will feature narration from Blessed.

Blessed lives in Windlesham, Surrey. He married actress Hildegarde Neil in 1978 and they have one daughter, Rosalind. He also has a number of dogs and is a patron of Hopefield Animal Sanctuary. 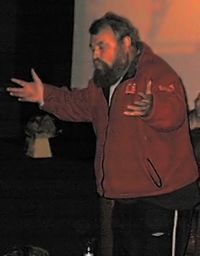 All content from Kiddle encyclopedia articles (including the article images and facts) can be freely used under Attribution-ShareAlike license, unless stated otherwise. Cite this article:
Brian Blessed Facts for Kids. Kiddle Encyclopedia.