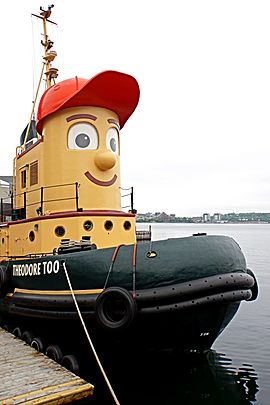 Theodore Too, a fullsize replica of Theodore Tugboat, titular star of the children's show, docked at Murphys Cable Wharf provides tours of Halifax Harbour in the summer.

Theodore Tugboat is a Canadian children's television series about a tugboat named Theodore who lives in the Big Harbour with all of his friends. The show originated (and is set) in Halifax, Nova Scotia, Canada as a co-production between the CBC (Canadian Broadcasting Corporation), and the now defunct Cochran Entertainment, and was filmed on a model set using radio controlled tugboats, ships, and machinery. Production of the show ended in 2001, and its distribution rights were later sold to Classic Media (now DreamWorks Classics). The show premiered in Canada on CBC Television, then went to PBS (Public Broadcasting Service), was on Qubo in the United States, and at one time had appeared in eighty different countries.

The show deals with life learning issues portrayed by the tugs or other ships in the harbour. Most often, the tugs have a problem, or get involved in a struggle with each other or another ship, but they always manage to help one another resolve these problems and see them through. Their main focus however, is to always make the Big Harbour the friendliest harbour in the world, and to always do a good job with their work related tasks.

The original idea for the series came to Halifax native Andrew Cochran, as he tried to explain the unique characteristics and work of Halifax Harbour vessels to his three-year-old son while walking along the Halifax waterfront. According to Cochran, "When you are with kids, you tend to give human characteristics to buildings, cars and boats." Cochran and his production company, Cochran Entertainment, went on to lead the development of the series with the CBC in Canada, starting in 1989. Production commenced in 1992 with the first broadcasts aired on CBC in 1993. Cochran Entertainment produced all 130 original episodes with Cochran as the executive producer. Jeff Rosen served as the Executive Story Editor and Principal Writer of the series. The designs and faces for most of the characters were created by art director and master model maker Fred Allen. CBC Art Director Tom Anthes designed the set, which featured buildings and structures of Halifax Harbour. More than 60 of the 130 episodes were directed by Robert Cardona, the co-creator of the television show Tugs and producer of Thomas & Friends. These series employed techniques later used in Theodore Tugboat such as humanized vehicles, life lessons and the use of a 1960s pop culture figure as narrator.

The show has one human character, The Harbourmaster, and six central tugboat characters, led by the show's namesake, Theodore Tugboat. Other ships, of all sizes, provide a large number of regular and occasional characters along with a few talking structures.

Along with all the duties of a real-life harbourmaster, The Harbourmaster is the narrator of the series, and provides voices for the entire cast of characters. He is the only human on the show to be played live by a screen actor (other on-screen humans being small figurines, much like Thomas and Friends), and is portrayed in the Canadian and US versions by the late Denny Doherty, formerly of The Mamas & the Papas, and by other performers internationally. The Harbourmaster introduces the theme at the beginning of every episode by addressing an issue that he has in common with the tugs. He also loves to play the tuba and is a good friend of a man named "Rodney" (who is never seen). The role, and the person playing the role, is similar to that of Shining Time Station, the American series that featured Thomas & Friends; like Theodore Tugboat, that series initially starred (and was narrated by) an entertainment figure associated with the 1960s. Ringo Starr (of The Beatles), and later, comedian George Carlin, both played the role of "Mr. Conductor". He also, like the narrator of TUGS, but unlike the narrators of Thomas the Tank Engine (Starr & Carlin at least) – can communicate on screen with the Tugboats. 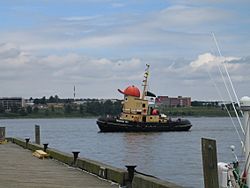 This life-size version of Theodore Tugboat, Theodore Too plies the waters of Halifax Harbour.

A number of ships based in the Big Harbour appear as recurring characters. They include Phillip and Philmore the Ferry Twins, Pearl and Petra, the Pilot Boats, as well as Northumberland Submarine, Rebecca the Research Vessel, and Bluenose the Sailing Ship. A number of barges appear frequently, most notably the grumpy Guysborough the Garbage Barge and Barrington Barge as well as a few regular talking structures such as Benjamin Bridge and Donald Dock.

Many visiting ships such as Kingston the Cargo Ship, Queen Stephanie the cruise ship, and Canso Colossus the supertanker appear in several episodes along with a large number of named visiting cargo ships and some rare special visitors such as Snorri the Viking Ship and Kulu the Canoe.

There are one hundred-thirty episodes in the series. They were produced in five seasons:

Each episode always follows the same format within the series.

The show always opens with the theme song, and the opening title dissolves into the Harbourmaster's office. The Harbourmaster is normally doing something or thinking about something, which prompts him to remember when one of the tugboats was involved in a similar scenario.

As the Harbourmaster starts telling the story, the camera shot dissolves into a shot of the tugs working somewhere, or getting their orders from the Dispatcher. In the first few minutes of the episode, the tugs encounter a problem, and they use their heads to solve it. "It is the classic three-act structure," said series creator Andrew Cochran, "Theodore encounters a problem, the problem gets worse, he solves the problem." Other times, the tugs have to conquer an emotional problem, such as not feeling good enough, or having to say goodbye to a friend. As each episode continues, the tugs resolve their problems, and life returns to normal in the Big Harbour.

The scene again dissolves into a shot of the Harbourmaster's office, with the Harbourmaster deciding to pay attention to the lesson learned by the tugs. During this time, he sometimes communicates with the tugs through his office window (they reply with the sound of their whistles), plays his tuba, or listens to his friend Rodney playing bagpipes. The Harbourmaster finally says "Thanks for visiting us here in the Big Harbour, and we'll see you all again next time.", and the credits roll.

On the half-hour PBS series, following the first story, the Harbourmaster's goodbye is instead followed by a voice-over, reminding viewers to stay tuned for the next story, and prompting them to visit the PBS website. 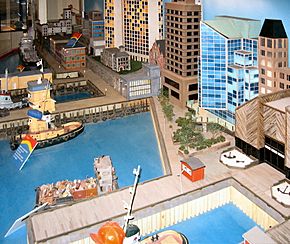 View of the Theodore Tugboat studio models used for filming the children's television series. They were photographed on permanent display at the Maritime Museum of the Atlantic in Halifax, Nova Scotia. Virtually all of the buildings are based on actual buildings on the Halifax waterfront.

The series was filmed in the former Alexander McKay School on Russell Street in Halifax's North End, which Doherty (the Harbourmaster) had attended as a child. At the peak of production, the show employed forty people. The characters, including Theodore, were designed and built by Fred Allen, a Halifax artist and set designer who strove to balance expressive human faces with realistic and weathered industrial details. Allen and three model assistants built the models in a workshop adjacent to the large set located in a water-filled gymnasium. The radio controlled models were driven by propellers and used underwater wheels to provide guidance and avoid drifting out of shots. Blue food colour was used to give an ocean look to the water. While Allen built the vessel models, the background set, inspired by the cityscape of Halifax and Dartmouth buildings, was built by the art department at CBC Halifax. Many of the original models used to film the series can now be seen at Halifax's Maritime Museum of the Atlantic, while a few others were sold on eBay in 2010.

The characters are loaded with references to Halifax Harbour, Nova Scotia, the Maritimes, and Atlantic Canada in general. Many of the references are obvious (such as Bedford buoy) while others are more obscure. The following is a list of other references:

The Canadian Theodore VHS tapes were made by Children's Group and PolyGram Video. They contained stickers of all the tugboats and two episodes.

The US Theodore Tugboat tapes were released through PBS Home Video and Warner Home Video. Most of these tapes are common on online sites. They usually contain three episodes, with the exception of "Theodore's Big Adventure" with two, and "Theodore's Exceptional Friends" which has five, also containing a special handbook.

The Murphy's Company Store in Halifax has copies of some US releases on DVD. These include; Big Harbor Bedtime, Nighttime Adventures, and Theodore's Friendly Adventures. In 2007, 2 DVD volumes were released in Norway, Denmark, Sweden, and Finland. A DVD was released in The Netherlands in 2012, followed by a second volume in 2013.

In a deal Cochran did with Random House in 1998, the following Theodore Tugboat books were published In the late 2000s Nimbus Publishing released a series of books featuring Theodore Too. 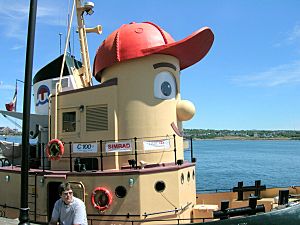 There were several tie-ins linked with the series. Notably, the producers, Cochran Entertainment, worked out a marketing deal with European toy manufacturer BRIO to produce wooden toy replicas of some of the main characters, as well as a line of scale die-cast models and bathtub toys manufactured by Ertl. The characters were retired in 2000. A set of squeezy toys were made by Alpi. Puzzles and games were made by International Playthings.

A life-sized replica of Theodore Tugboat (called Theodore Too) was constructed by the series producers in the late 1990s, that went on a fifty-city tour of harbours from Tampa, Florida, through the Great Lakes to Chicago, Illinois, and back again to Halifax. It still resides in Halifax Harbour where it was purchased by a touring company, and is used for sight seeing tours of the harbour.

In mid 2020, the touring company, Ambassatours, announced plans to sell the replica boat for CAD$496, 000. Response from the public was generally nostalgic and emotional, as many, especially haligonians had not only grew up with the show, but with the boat as well.

Ertl released a number of Theodore Tugboat toys, including die-cast boats, a set of rubber boats that float, and a "Press'n Roll" series of plastic boats (where pressing the smokestack then releasing it makes the boat move).

BRIO released many Theodore Tugboat toys for interaction with its toy trains. Other than the tugboats, Brio released Benjamin Bridge, Clayton the Crane, Chester the Container Ship, Barrington, Bonnavista, and the Dispatcher. The tugs and the Dispatcher feature moving eyes.

All content from Kiddle encyclopedia articles (including the article images and facts) can be freely used under Attribution-ShareAlike license, unless stated otherwise. Cite this article:
Theodore Tugboat Facts for Kids. Kiddle Encyclopedia.