The Chickering and Sons piano manufacturing company was established by Thomas Chickering's father and was among the first and most celebrated piano manufacturers in the United States. Thomas took over administration of the firm from his father in 1853.

In 1862, Chickering became a colonel during the American Civil War, eventually being awarded the honorary grade of brevet brigadier general.

In 1845, at the age of 21, Thomas Chickering began working with his father in the family firm. He gained not only skills for designing pianos but also cultivated a talent for business and marketing.

Chickering married Caroline Battelle on September 8, 1847 and had at least one child, Lillian Chickering Prince, in 1849.

For several years before the Civil War Chickering had been interested in the military and commanded a company, the New England Guards, in the state militia. On September 15, 1862, Chickering was placed in command of the 41st Massachusetts Infantry. The regiment was deployed to New Orleans in November 1862 as part of Major General Nathaniel Banks's Louisiana expedition.

During the winter of 1862–1863, the 41st Massachusetts garrisoned Baton Rouge, Louisiana without any significant incident. During April and May 1863, the 41st Massachusetts was part of an expedition to Opelousas, Louisiana to forage for supplies and gather freed slaves by the thousands for recruitment into the Union Army. Chickering was appointed military governor of Opelousas and commanded the Union troops (consisting of seven regiments of infantry) that were part of the expedition.

In June 1863, as Chickering and the 41st Massachusetts prepared to join other troops of the Department of the Gulf in the Siege of Port Hudson, the regiment was consolidated with three companies of Massachusetts cavalry and became a mounted unit. The regiment was renamed the 3rd Massachusetts Volunteer Cavalry. The unit saw action in the Siege of Port Hudson and the Red River Campaign. Chickering commanded this unit until September 1, 1864 when he resigned from the army.

For his service during the war, Chickering was awarded the honorary grade of brevet brigadier general, nominated February 21, 1866, confirmed April 10, 1866, to rank from March 13, 1865. 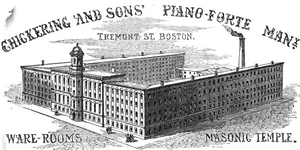 Following the war, Chickering returned to his career as senior partner of Chickering and Sons. The company continued to expand its reputation through new designs and patents. Chickering pianos were exhibited at the 1867 World Exposition in Paris to much acclaim. For his accomplishments, Chickering was honored in Paris by the award of membership in the Légion d'honneur.

The Chickering and Sons piano company, under the management of Thomas Chickering's younger brother, Frank Chickering, further increased their prestige after opening a showroom in New York City. The firm also built a concert hall, Chickering Hall, in New York in 1875 which hosted concerts by accomplished musicians of the era. The "famous" hall, according to The New York Times, stood on the northwest corner of Fifth Avenue and 18th Street. It was designed by architect George B. Post. The hall was torn down shortly after the firm sold the building in 1901.

All content from Kiddle encyclopedia articles (including the article images and facts) can be freely used under Attribution-ShareAlike license, unless stated otherwise. Cite this article:
Thomas Edward Chickering Facts for Kids. Kiddle Encyclopedia.