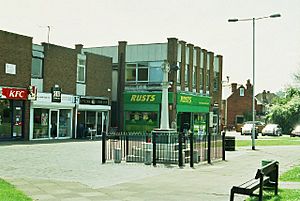 Tilehurst is a suburb of the town of Reading in the Royal County of Berkshire, England. It is in the west of central Reading. It lies within the boundaries of The Borough of Reading and partly in the district of West Berkshire. The part within West Berkshire forms part of the civil parish of Tilehurst. It also includes the northern part of Calcot and a small rural area west of the suburb. The Tilehurst Water Tower, built in the 1930s, towers over the suburb. In the 2011 Census, 14,604 people lived in Tilehurst.

All content from Kiddle encyclopedia articles (including the article images and facts) can be freely used under Attribution-ShareAlike license, unless stated otherwise. Cite this article:
Tilehurst Facts for Kids. Kiddle Encyclopedia.