Tory Island, or simply Tory (officially known by its Irish name Toraigh), is an island 14.5 kilometres (9.0 miles) off the north-west coast of County Donegal, Ireland, and is the most remote inhabited island of Ireland. It is also known in Irish as Oileán Thoraí or, historically, Oileán Thúr Rí. The word Tory comes from the Middle Irish word Tóraidhe, which means “bandit.”

The main spoken language on the island is Irish, although English is spoken as well, to communicate with visitors. Tory is part of the Donegal Gaeltacht, and Ulster Irish (Gaeilge Uladh) is the main Irish dialect in use. 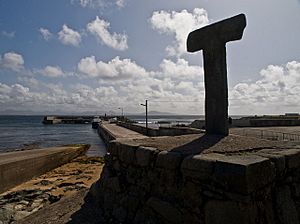 Tau cross. One of only two tau crosses left in Ireland

The island is approximately 5 kilometres (3 miles) long and 1 kilometre (0.6 miles) wide, with an area of 1.38 square miles. The 2016 census recorded a population of 119, a decrease from the 2011 population of 144. The population is distributed among four towns: An Baile Thoir (East Town), An Baile Thiar (West Town), An Lár (Middletown) and Úrbaile (Newtown). Petrol and diesel are available from Tory Oil at prices significantly higher than on the mainland.

Tory has no airport, but it does have regular ferry connections from mainland County Donegal. The ferry operates daily all year round. It does not take cars, but holds up to 70 passengers. During the winter months, ferry crossings may not be possible on some days due to rough seas. However, between November and March a 4-seater helicopter operates every other Thursday between Falcarragh and Tory.

In the apocryphal history of Ireland, Lebor Gabála Érenn, Tory Island was the site of Conand's Tower, the stronghold of the Fomorians, before they were defeated by the Nemedians in a great battle on the island. The later Fomorian king, Balor of the evil eye, also lived here. Balor would imprison Ethlinn in a tower built atop Tor Mór (or Túr Mór in Old Irish, meaning The High Tower). Tor Mór is the island's highest point.

A monastery was founded on Tory in the 6th century by Colmcille. The monastery dominated life on the island until 1595, when it was plundered and destroyed by English troops, who were waging a war of suppression against local chieftains. (The monastery's bell tower, built in the 6th or 7th century, is the largest structure to have survived.)

In 1608, in what is known as the Siege of Tory Island (one of the final incidents of O'Doherty's Rebellion), a group of the surviving rebels took shelter in the castle on the island, but began killing each other in hopes of securing a pardon.

The final action in the Irish Rebellion of 1798, the naval Battle of Tory Island, took place in the sea just off the island. 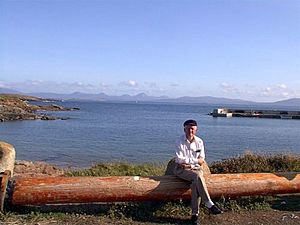 The late "king of Tory", Patsy Dan Rodgers (d. 2018), waiting near the harbour to welcome visitors to the island

The first battleship the British lost during World War I, the super-dreadnought HMS Audacious (23,400 tons), was sunk off Tory Island on 27 October 1914 by a naval mine that had been laid by the armed German merchant-cruiser Berlin. The loss was kept an official secret in Britain until 14 November 1918 (three days after the end of the war). The sinking was witnessed and photographed by passengers on RMS Olympic, the sister ship of RMS Titanic.

Since the 1950s, the island has been home to a small community of artists, and has its own art gallery. The English artist Derek Hill (d. 2007) was associated with the Tory artist community.

In keeping with a long-standing tradition, a "king" is chosen by consensus of the islanders. The most recent "King of Tory" (in Irish, Rí Thoraí) was the painter Patsy Dan Rodgers (Patsaí Dan Mac Ruaidhrí), who held the post from the 1990s until his death on 19 October 2018. The king has no legal power, but has duties that include acting as a spokesperson for the island community and welcoming people to the island. 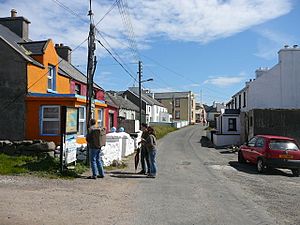 Power is generated on the island today by three diesel electricity generators. These have a total capacity of 4 MW and burn through approximately 500 litres of fuel every day.

In 2009, the outside world’s attention was drawn to the island when a former resident was awarded a payout as damages following a court case over the fact that his house was demolished and the grounds were converted into a car park. In 2015, the island's only café was destroyed by fire.

The table below reports data on Tory Island's population, taken from Discover the Islands of Ireland (Alex Ritsema, Collins Press, 1999) and from the census of Ireland. Censuses in Ireland before 1841 are not considered complete or reliable.

Tory Island has a number of sites connected with historical events and island mythology: 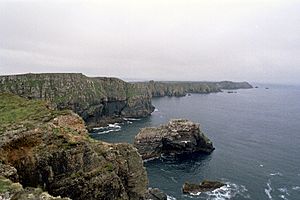 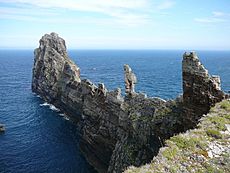 The island is a designated “Important Bird Area”. It is a breeding site for corn crakes (Crex crex), a globally threatened species whose numbers have fallen as agriculture has intensified. In 2007, Tory Island recorded 18 calling males, down from a recorded maximum of 34 calling males in 2003. In 2010, numbers dropped down further to 10. In addition to its indigenous birdlife, the island records many vagrants.

Because of its high winds, the island has no trees.

All content from Kiddle encyclopedia articles (including the article images and facts) can be freely used under Attribution-ShareAlike license, unless stated otherwise. Cite this article:
Tory Island Facts for Kids. Kiddle Encyclopedia.