Tourism in Atlanta facts for kids 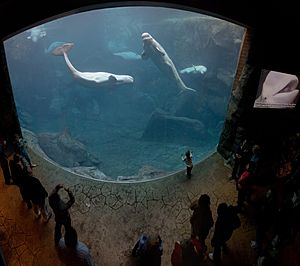 Beluga Whales at the Georgia Aquarium

As of 2010, Atlanta is the seventh-most visited city in the United States, with over 35 million visitors per year. The city was the 12th most popular destination for overseas visitors, who numbered 712,000 in total (2010).

Atlanta's premier tourist attraction is the world's largest aquarium, the Georgia Aquarium, located a 20-acre (81,000 m2) site at Pemberton Place that is also home to the World of Coca-Cola and within walking distance of Centennial Olympic Park, Mercedes-Benz Stadium, State Farm Arena, the CNN Center and other downtown Atlanta tourist attractions.

Atlanta also attracts visitors with its performing arts venues, museums and historical sites, parks, cuisine, and its many festivals and events.

Sites of interest to tourists

All content from Kiddle encyclopedia articles (including the article images and facts) can be freely used under Attribution-ShareAlike license, unless stated otherwise. Cite this article:
Tourism in Atlanta Facts for Kids. Kiddle Encyclopedia.