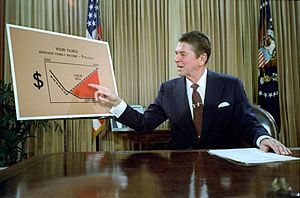 Reagan gives a televised address from the Oval Office, outlining his plan for tax reductions in July 1981..

Supply-side economics (often called trickle-down economics) is a theory that if taxes were cut on the richest people in society, rich people would use their extra money to invest in the economy, but if taxes were increased, the wealthy would leave the country and invest somewhere else where the tax rates are lower. People who support supply-side economics believe that taxes punished productivity and if they were lowered, people would produce more goods and services. Many supporters of supply-side economics also support things such as limited government spending, low inflation, and regulating the economy less.

Supply-side economics was used while Ronald Reagan was president during the 1980's. Income taxes on the wealthiest Americans were cut from 70% to 50% to 28% during his two terms. Also, capital gains taxes were cut. Supporters of supply-side economics mention that those tax cuts have resulted in economic recovery during the 1980's and the strong economic boom in the 1990's and first decade of the 21st century.

Critics of supply-side economics say that the wealth get handed tons of money in hopes that a very small amount of it will trickle down to the poor, and they call it voodoo economics. Many critics say that supply-side economic policies are bad because it results in a bigger gap between the rich and the poor. They also criticize that the reduction in taxes results in cutting programs for the poor people who need it. Other critics point out that large supply-cuts tax cuts in combination with increases on military spending has resulted in the government being in a large amount of debt.

All content from Kiddle encyclopedia articles (including the article images and facts) can be freely used under Attribution-ShareAlike license, unless stated otherwise. Cite this article:
Supply-side economics Facts for Kids. Kiddle Encyclopedia.