For others, see Tynan (disambiguation).

Tynan (from Irish: Tuíneán, meaning "watercourse") is a village, townland (of 375 acres) and civil parish in County Armagh, Northern Ireland. It is situated largely in the historic barony of Tiranny, with some areas in the barony of Armagh. It had a population of 71 people (35 households) in the 2011 Census. (2001 Census: 71 people)

Tynan won the status as the most well preserved rural Irish village in 1993.

Main page: The Troubles in Tynan

Tynan Abbey has an extensive demesne, a country house belonging to the Stronge family was situated here until it was destroyed by the Provisional IRA in 1981. The ruins have since been demolished. The grounds hold an extensive cemetery with grave stones going back centuries and others worn beyond recognition.

Tynan has a High cross in the village's church yard, dating from 700–900. It shows a carving of Adam and Eve under an apple tree. 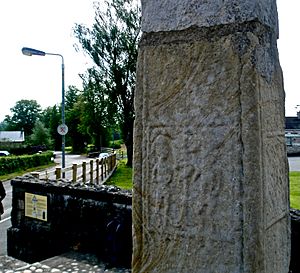 Adam & Eve under a tree.

Tynan was formerly served by mainline trains of the Great Northern Railway (Ireland) and was also the eastern terminus of the narrow gauge Clogher Valley Railway (which opened in 1887 and closed in 1941). Tynan railway station (on the Clogher Valley railway opened on 2 May 1887 and shut 1 January 1942. Tynan and Caledon railway station on the mainline opened on 25 May 1858 and shut on 1 October 1957.

The civil parish contains the villages of Killylea, Middletown and Tynan.

All content from Kiddle encyclopedia articles (including the article images and facts) can be freely used under Attribution-ShareAlike license, unless stated otherwise. Cite this article:
Tynan Facts for Kids. Kiddle Encyclopedia.