The Upper Iowa River Oneota Site Complex is a series of 7 Iowa archaeological sites located within a few miles of each other in Allamakee County, Iowa, on or near the Upper Iowa River. They are all affiliated with the Late Prehistoric Upper Mississippian Oneota Orr Focus. In some cases there are early European trade goods present, indicating occupation continued into the Protohistoric or early Historic period. 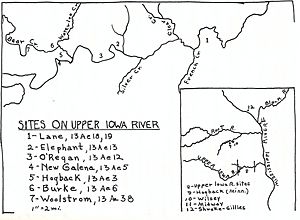 The full site report was produced in 1959 by Mildred Mott Wedel. Due to the cultural similarities and close proximities of the sites, the data were combined for analytical purposes.

The Upper Iowa valley contained several ecosystems which provided resources to the Prehistoric inhabitants. The river itself provided abundant fish, mussels and turtles. The floodplain contained rich soil for agriculture. The terraces overlooking the river were well-forested with oak, maple, hemlock, elm, as well as nut trees such as hickory, black walnut and butternut, to supplement the agricultural diet. The forests also provided habitat for deer. Beyond the terraces were the prairies which provided habitat for elk and bison.

The Orr Focus is a regional manifestation of the Upper Mississippian Oneota cultures which were present throughout the American Midwest in the late Prehistoric and Protohistoric to early Historic periods. The subsistence base of the Orr Focus people, like most Upper Mississippians, was primarily agricultural supplemented by hunting, fishing and gathering.

The 7 sites in the Upper Iowa complex are the type sites for the Orr Focus. Other Orr Focus sites in Wisconsin include Shrake-Gillies, Midway and Pammel Creek. The Orr Focus is distinctive from other Oneota Foci mainly in terms of the pottery which is based on rectilinear (instead of curvilinear) decoration and frequent notching on the lip.

It has been pointed out that the Huber Phase pottery (from the Chicago area) very closely resembles Orr Focus. Specifically, Huber Trailed is thought to be a very similar type to Allamakee Trailed. Huber Trailed has rectilinear patterns, lip notching and very similar vessel form to Allamakee Trailed. A detailed comparison of pottery from a Huber site (Oak Forest) and an Orr Focus site (Midway) did reveal some differences between them: the lips on Orr pottery were almost always rounded, which Huber lips could be rounded, flattened or beveled; the rim profiles on the Orr pottery were almost always vertical while the Huber pottery more often had inward or outward curve; the Huber necks were more often angular while the Orr necks were more often curved; and trailed lines were more often to be combined with punctate decoration on Orr than Huber.

Both Orr Focus and Huber have been dated to the late Prehistoric to Protohistoric to early Historic periods. Radiocarbon dates on 6 samples from the Lane site ranged from A.D. 1426-1660 and Huber sites such as Oak Forest show a similar date range, with associated European trade goods.

An Allamakee Trailed vessel has been reported from early Historic contexts at the Rock Island II Site in Door County, Wisconsin, situated in Green Bay (Lake Michigan). The stratum was dated to a mixed Huron-Petun-Ottawa (proto-Wyandot) occupation dated to A.D. 1650/51 to 1653. This narrow date range was possible because Ronald Mason found specific references to this occupation in the early French records. The presence of this vessel at Rock Island is significant because it demonstrates the Orr Focus was still in existence in the early Historic period.

The seven sites on the Upper Iowa River are located in the same area that the early French explorers and fur traders found the Ioway Native American tribe. Archaeologists are in general agreement that the Orr Phase pottery represents the Prehistoric cultural remains of the Ioway tribe, as well as the closely related Otoe tribe.

The efforts of Keyes and Orr in excavating 7 sites on the Upper Iowa River resulted in the recognition of a new division within the Upper Mississippian culture group, the Oneota Orr Focus. The main diagnostic artifact of this Focus is the shell-tempered Allamakee Trailed pottery. The Orr Focus has been radiocarbon dated to the late Prehistoric to Protohistoric and early Historic Periods, and the artifacts recovered confirm this late date. it is believed to represent the Prehistoric culture of the Ioway and Otoe tribes.

All content from Kiddle encyclopedia articles (including the article images and facts) can be freely used under Attribution-ShareAlike license, unless stated otherwise. Cite this article:
Upper Iowa River Oneota Site Complex Facts for Kids. Kiddle Encyclopedia.